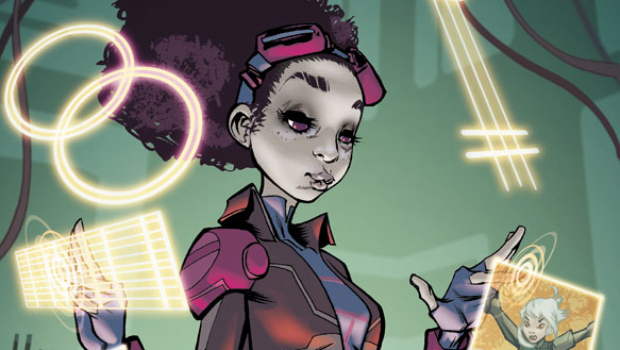 Our hero wakes up to a news report about the mechanical lions and two mysterious characters that appeared on stage at a concert in Richmond VA. The report goes on to state that it’s unclear if this is a terrorist attack or a prank gone wrong. Aspen comics just keep getting better and this title is a fun fantasy frolic into worlds unknown.

Mark Roslan and Gabe Carrasco bring a light-hearted touch to this title as Sybil arrives in Elias room on earth. She’s confused as to why the metal on his sword is so weak and he has to explain that it’s not a real sword all the while hiding his new friend from his mother, who’s pounding on his bed room door. I really enjoy the chemistry between Elias and Sybil in this issue as she wonders how Elias can be the great warrior that her uncle thought he’d be when he’s just an average teenager. Great stuff includes Elias getting caught with Sybil in his room and the King sending out soldiers to track down his daughter, whom he doesn’t know is in another dimension altogether.

Alex Arizmendi brings a cartoony touch to the proceedings which adds to the light-hearted nature of the goings on in this title. It’s all played for fun and fantasy and his take on the characters reminds me almost of a Harry Potter feel to the proceedings. Highlights include our heroes returning to Havos and the arrival of Omeil with his mechanical wolves.

This comic book is a lot of fun! The characters of Sybil from Havos and Elias from Earth having to fuse to take on their enemies brings some interesting conflict and their swapping of memories helps each of them learn about the others world and customs. Sybil’s goal of taking down an evil emperor and Elias not wanting to miss school in a battle that he has no interest in helps to flesh out the characters and make them relatable. Great action, fun and adventure like we haven’t seen in a long time within the pages of a comic book! Awesome read. ***1/2 (8.7 rating) 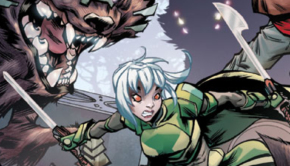