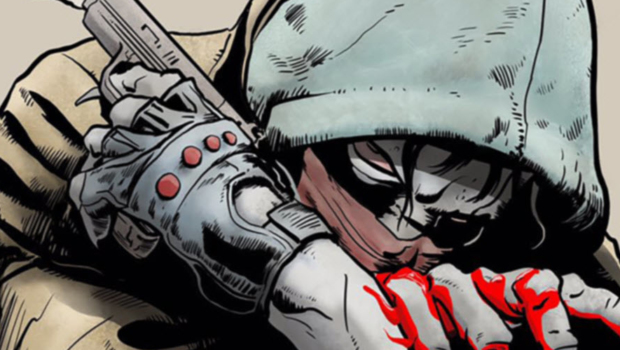 This title is about a government program to create werewolves out of soldiers. It sounds a little cheesy but stay with me. This one got a great no

ir feel for it that anyone who’s read my reviews knows I love. This issue opens with our hero being grilled by a fellow cop over his modus operandi.

Birch and Schneider bring Marrok into the deepest, dirtiest part of the city. While investigating a murder, there’s actually been three, he learns of a hitman people call “the Persuader.” Marrok also finds out a name from one of the enemies, Juicy. What draws us into this story is wanting to find out who killed the victim, it’s a guessing game in true detective form and each page brings more questions than it answers. Awesome stuff for fans of cop comics. The clues we see (no spoilers) would indicate that this isn’t just some random killing or a robbery. There’s bigger fish to fry than we first imagined! Great stuff includes the training montage with his mentor Old man. Also, the look into the relationship between the old man and our protagonist.

Stefani Magicianshouse gives the book a real independent feel. There’s not as much shadow or contrast that you would expect in this kind of book, but she more than compensates with her tough no-nonsense street type of characters. Some may see them as a bit stereotypical, like the pimp, but we get a good feel for the way these characters are drawn. The story and the art go well together and that’s what counts. Highlights include the fate of the aforementioned pimp and watching the old man’s memories.

Evil Kat Comix is an up and coming company that brings us some great titles, and this is one of their best. Marrok is an excellent and original character in a sea of stereotypes and his adventures are well worth the read. I can’t wait to discover the secret behind these seemingly random murders. **** (8.8 rating)