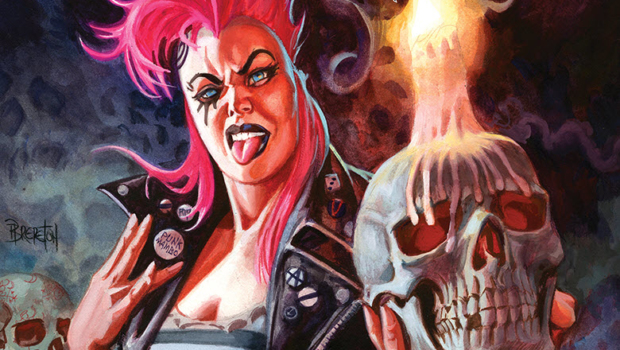 Eerie, the last comic book I reviewed began in New Orleans and so does this one. Our anti-hero confronts a group of deformed outcasts called the Grunch. A battle ensues as our protagonist informs the crowd that she’s looking for some friends and she learned that the Grunch might know something about how they went missing.

“Sorry about all this. But those kids are friends of mine. Well, as close to friends as I’ve got. More like superficial acquaintances. But you still can’t eat them.” – Punk Mambo

Cullen Bunn and the powers that be at Valiant have created another female anti-hero and her introduction proves her to be a bad ass with extraordinary powers. We learn that she has some special link with the spirit world and a being called Ayezan, but that link has been severed. What keeps us turning those pages is our desire to see Punk re-connect with the spirit and her attempts are thrilling. At one point when she tries, she conjures up a certain voodoo lady that Bobby Bare sang about in the ‘70’s. I haven’t seen an origin story this unique in a long time. Great stuff includes Ayezan possible link to the Lao and the banter between Punk and her spirit guide.

Adam Gorham takes us directly to hell with fantastic visuals and a spirit world unlike any other in the field of comic books. He’s got some freaky ghosts in his domain and he knows how to unleash them with panache. They’re scary and fun all at the same time and Punk could have come off looking like a less cartoony Tank Girl, but she’s her own plebe in his capable pencils. Highlights include the first appearance of the Grunch and the closing splash page.

How the Grunch stole Valiant. Here’s a refreshing first issue that introduces our anti-hero on a spiritual quest to find her old contact and the tangled webs that follow her search. In the true spirit of Valiant things get weirder as the story progress and they may have just created a super character, or it could turn out to be Tank Girl lite. It’s too early to tell, but it is a promising start. *** (8.2 rating)