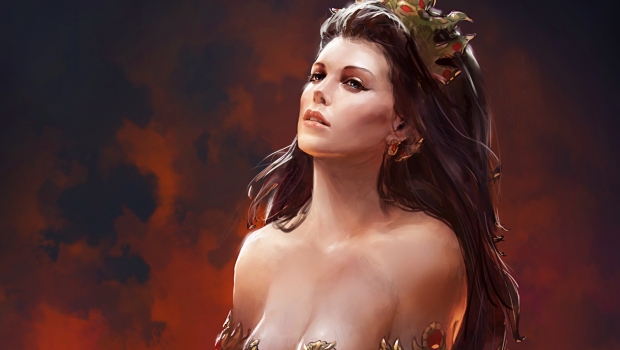 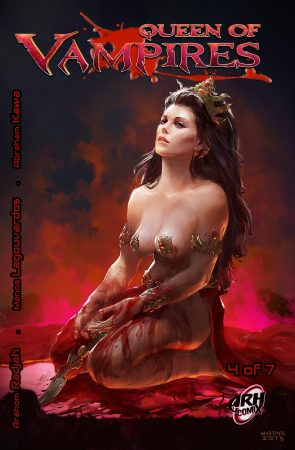 Do not stop at the (amazing hot) coverimage, thinking this is just a T&A story, because that would sell yourself short since this series is much more. The cover is art and the story is nothing short of mesmerizing.

After the sizzling read of #1-3 (review here) it is now time for the spare-time-consuming #4, which kicks into high-gear both story-wise as well as character-wise.

It is obvious that the creator put a lot of feelings into this story, and we wanted to show that despite of all the horror, the cruelty, and the hardness of character, ARKHALLA is still a normal woman with feelings but who was stripped of her humanity by her own cruel father, during events that are chilling on their own. What marks Arkhalla’s resilience and personal strength is the fact that under the most dire of circumstances she managed to take the upper hand. In this #4 it is shown in a flashback as well as in the action/gore/blood-drenched final pages.

Arkhala’s relationships with BEL and NARAMA, going from love and adoration to hate and betrayal, make for allies to turn on the Queen of Vampires.

This #4 seems to be all about the moment Arkhala realizes her feelings for the slave SHAMATH and how Shamath is making her reminiscent of her own past as well as her current actions. At the same moment Arkhala finds herself betrayed by everyone, including SHAMATH himself. This is for me the most interesting aspect of this chapter, how things can change so suddenly and so much from one moment to another.

How after betrayal comes personal insight in both Arkhala as well as Shamath… this truly is a most riveting moment in the comic and well-told.

It is clear that ARH has infused a lot of depth in this story, with the last four chapters being extremely touching and emotional. I am sure this 7-issue miniseries will become a truly Hollywood-worthy masterpiece!