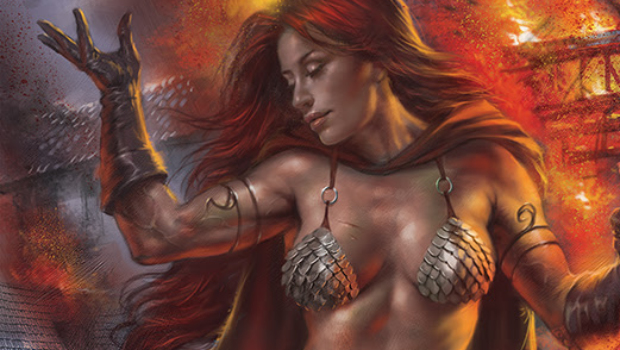 Review: Red Sonja Birth of the She Devil # 1

“Another day, another adventure, another night alone. The curse of Red Sonja.” – Red Sonja

Dynamite is really pumping out Red Sonja titles lately. That’s a good thing for us fans of the Hyborian age and Robert E. Howard. Though, technically the character was created by Roy Thomas and Barry Windsor Smith, she was inspired by other Howard creations Red Sonya of Rogatino and Dark Agnes de Chastillon. This issue opens with our heroine arriving at a Sultan’s palace where he proceeds to insult her, and she asks why she’s deserving of such insults. She’s merely there to collect the treasure that she was promised. He informs her that there is no treasure greater than his body and she can collect later in the privacy of his chambers. Not the treasure she was looking for!

Luke Lieberman begins this tale with another greedy Sultan who wants to put Red Sonja in his harem, a latest concubine to his collection, but, of course, his attempts are futile as no one enslaves Sonja! Our protagonist is searching for a young woman named Shashana who was once a slave for our hapless Sultan. I really enjoyed seeing Red with her temper getting the better of her again. She lashes out at those who would enslave her before she gets the information she wants and this leads to her gaining her vengeance against a slime ball, but not finding the answer to her question as to where Shashana is. She flees as the Sultan’s army chases her down and laments about her foolhardy actions later. The reactions of characters who lived in a more savage age are always what make these types of stories fun. We’re treated to flashback images of Sonja training Shashana and we learn about her relationship to this character. It’s watching this bond develop that helps us to relate to both characters and their relationship to each other so that by the end of this issue, we’re involved with the characters and want to see Sonja succeed in her mission. Great stuff includes being introduced to yet another character who was her mentor as he stumbles upon a drunken warrior who had just demolished a tavern with another bar room brawl. Also, Red’s blaming the disappearance of Shashana on another former friend.

Sergio Davila does great justice to our protagonist with his renderings and brings to this title a brutal harsh reality from a more untamed world and time. He’s got the characters down and his attention to detail makes this world a realistic era. Highlights include Red Sonja’s reaction to the Sultan and Sonja’s flashback to her training Shashana, which is told with tilted panels and slightly muted colors.

A great first issue that includes a lot of action and ancient shenanigans that we don’t see with many setup types of comics first issues as Sonja is trying to find a former friend and hope that she’s still alive. We don’t really learn why she wants to find her yet but that only adds to the mystery and expectations for the next chapter. It’s a complicated situation in a more barbaric era that only adds to the excitement of what to expect with the next issue. Our heroes ride into a recently demolished village only to find… to be continued! **** (9.2 rating)

Red Sonja Birth of the She Devil # 1