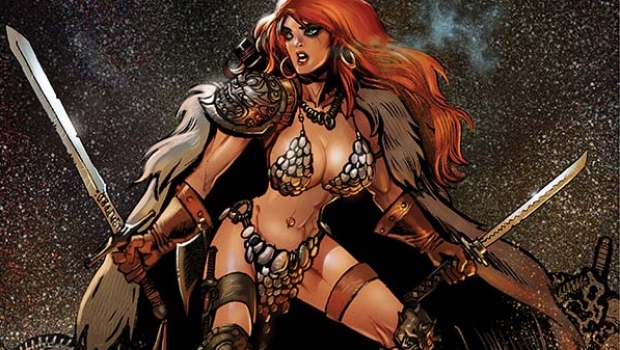 These days, as fans of bad-girl comics might be aware, there’s a new series starring Red Sonja, that She-Devil With a Sword, as she tries to find a place for a Hyrkanian warrior woman in a twenty-first century world. But even as Sonja deals with her ongoing case of Future Shock, there are still plenty of adventures in her old world that are left to tell. 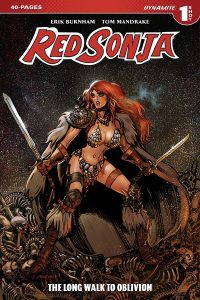 Which brings us to Red Sonja: The Long Walk to Oblivion, a 40-page one-shot special on sale May 10 from Dynamite Entertainment. Written by Erik Burnham (Back to the Future, Scarlet Spider, Mars Attacks the Real Ghostbusters) and illustrated by comic-art great Tom Mandrake (Batman, Swamp Thing, The Spectre), it’s a direct prequel to Red Sonja, Vol. 4 #0, the 25-cent issue that kicked off Sonja’s recent series of adventures in modern-day New York City (and which I reviewed when it was first published).

Stopping for a drink in a tavern, Sonja is hired by a warrior from the Kingdom of Meru to deal with a demon running wild; according to their high priest, Sonja’s the only one who can stop the chaos. With the promise of good pay and good drink when the job’s done, Sonja agrees—unaware that lurking in the shadows of Meru is her old nemesis, the evil mage Kulan Gath.

Storywise, Burnham presents a pretty basic tale that gives background to the opening scene in Red Sonja #0 but doesn’t add anything to Sonja’s character—well, except maybe for demonstrating her new skill at lassoing a flying wyvern and riding it like Pegasus into battle! It’s the sort of one-and-done story you’d find in Sonja’s run of old-school Marvel issues, which isn’t a bad thing, and should appeal to longtime fans. Helping with that appeal is Mandrake’s art as Sonja battles oafish barbarians and fire-breathing demons alike, coolly lopping off heads as she charges into battle in her iconic chain-mail “bikini.”

Bottom line? Although it’s a standard adventure that doesn’t really add anything to the Sonja mythos, regular fans and continuity completists might want to pick it up since it leads directly into the current Sonja series. Besides, it’s classic chain-mail-bikini Sonja in a story drawn by the great Tom Mandrake—you can’t really go wrong with a combination like that!