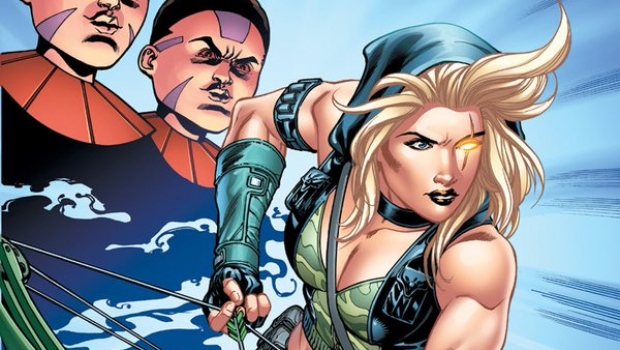 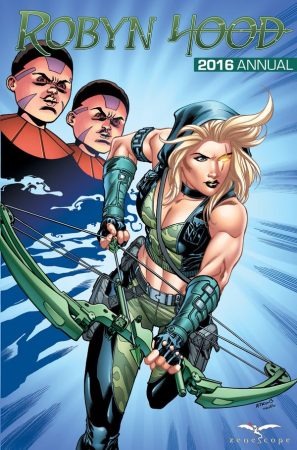 And now we come to the final issue of Robyn Hood. The series began with Robyn Locksley in Myst. A realm of Swords and Sorcery. She completed her mission in Nottingham and headed back to her home in New York city. It was here that she began her career as a Supernatural Private Investigator along with the witch Marion Quinn. Marion wants to get married. This would leave Robyn alone once again.

The annual begins action packed right away with Robyn punching out a bunch of demons. Typical right? Well this time she’s in a dress. That is definitely a first for our demon hunting warrior. Then we cut to Robyn and Marion having a little heart to heart. Robyn congratulates Marion on her wedding but expresses worry that this will be the end of them working together. Marion assures her that it’s not the end but a new beginning. An old friend shows up with an urgent message for Robyn, he surprises her to the point where she spills coffee on her dress.

Pat Shand knows his characters well. With all the titles he works on for Zenoscope you’d expect him to develop writer’s block but he keeps delivering the classics. In this annual somebody has dug up old friends of our hero and the only way she can send them back is by getting them to relive their original deaths. This creates a catharsis within our hero. It’s a poignant moment and tugs at our heart strings.

Larry Watts delivers once again. His demons are ferocious and there’s even a panel that reminds me of the old Creepshow movie, the episode called Father’s day when the demon comes out of the ground wanting his cake. We get the proper sense of a bittersweet send off. We see the emptiness in Robyn’s eyes when she has to relive some of the saddest moments of her life but we also see the joy as she’s happy for her friends marriage.

The conclusion is, as I said, bittersweet. Old friends and old enemies try to disrupt one of the happiest moments in Robyn and her friends lives. But the wedding guests put up with the violence that ensues, after all, what can you expect when you invite Robyn Hood to your wedding.

Will Marion actually get married on this day? All the demons in hell will try to prevent such a happy occasion. You’ll have to buy the issue to find out.