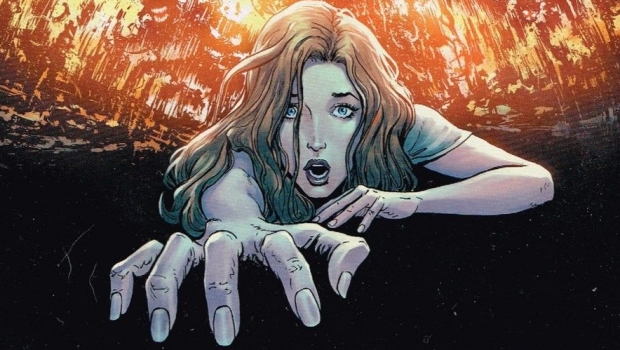 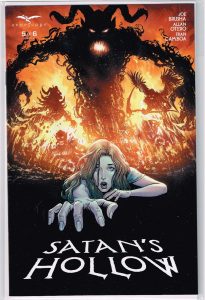 We finally see the connection between Satan’s Hollow and Sandra. Meanwhile John has been pulled into the darkness and closer to the queen and there’s little hope left for him. We also see that the Blue Ashe police chief has been engulfed by the terror in the tunnel. This means that the gateway to hell is almost open! This issue begins with a police officer coming up on the chief’s vehicle. He gets out to investigate and realizes the chief is gone. Meanwhile John is being seduced by a sexy demon as she tries to lure him into the final phase of her deception. Sandra seeks help from an old friend, Jacob.

Joe Brusha turns up the heat in Satan’s Hollow #5 as we see our heroes sink deeper into their own hell which they have created. Linda contacts Sandra and shows him a picture that her son drew. It’s a creepy pic showing demons entrapping Human beings. It’s here that Sandra realizes that John is in the Hollow. Linda accuses John of taking her son. The cops along with Sandra and Jacob race to the hollow hoping to prevent the forces of evil from succeeding in their ritual. Brusha creates a pulse-pounding atmosphere that leaves us on the edge of our seats.

Allen Ottero has helped to create some blood-curdling type of demons and his pictures are very effective in creating a horrific community that will scare the hell out of anyone who enters in. Some of his most effective work is when John is under a female demon’s trance. Several sets of mouths with razor sharp teeth appear on his chest. His depictions of the demon’s strong hold are exceptionally strong and he successfully creates an atmosphere that’s sure to send chills down the reader’s spine.

It’s quite effective and sure to grab the attention of the comic book store surfer, especially if they’re looking for a horror comic to read. Sandra is trying to crawl out of the pit of hell with a fiery demon behind her. Behind the demon are many more demons which convey a spirit of hopelessness. This cover succeeds in conveying what’s happening in this issue.

Sandra and Jacob finally discover John’s whereabouts but will they arrive in time to prevent the demons from succeeding in their ritual? Linda’s son, Kenny, is poised to be sacrificed in an effort to complete the ritual. John is so under the demon’s spell that he is an unwitting pawn in their goal of achieving a satanic hold on the residents of this unsuspecting town. The body count rises as Sandra and Jacob race to prevent a catastrophe. If they fail Satan’s Hollow will never be the same. Sandra discovers something distasteful about Jacob. To be continued.