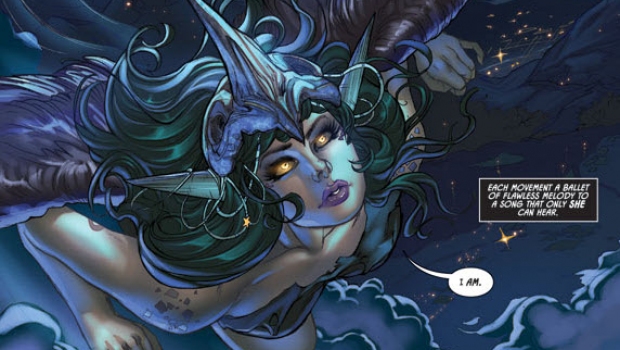 When first hearing the name Nei Ruffino, you might think about the colorist at Zenescope. True, that is where she started, yet she is so much more in the meanwhile. She is an admired cover-artist and a graceful presence at the conventions who invite her, and now she adds creator to her already creative force of nature.

The first issue Secret Life Of Crows is the story of crows, the fact that they transform into something between a girl and a crow, a form not unlike that of a mythical harpy, with feathers abundant and clawed feet. The crow will shed its skin at sundown and come sunrise the stunning creature metamorphoses back to the crow-state.

This first issue is all about this event, nothing more and nothing less. But so much more at the same time…

Nei’s creation, aided fully with fellow-creator Raven Gregory, is one of mesmerizing beauty as Nei takes up all art-chores. This comic is a poem at its core, with images so vividly supplementing to the words you read and feelings you will undergo. This is more then a comic, more then an artbook, more then a poem…

For sale via Elysium Treasures.