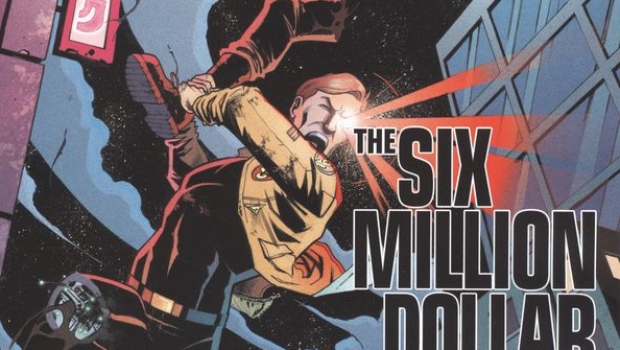 This issue opens with Steve and Niko under attack by some helicopters in a rainstorm. Steve’s Bionics is going a little haywire and they’re forcing him to do things he wasn’t planning to do. His battery is dead but gets re-charged with a lightning blast and that’s when things go haywire.

“This is why you stick to plans.” – Niko

Christopher Hastings keeps Steve and Niko busy as they attempt to get to the bottom of this mystery. It’s a fun issue as the other two in this title have been and the excitement level keeps getting turned up a notch or two with each issue. Hastings loves messing with Steve’s Bionics and putting him in quirky situations where they don’t seem to work the way they should. I really enjoy the predicaments he’s putting Steve in and the clever ways that Steve responds to his malfunctioning equipment. Great stuff includes Steve’s attempt to shoot a laser from his bionic eye and the introduction of some of Niko’s family.

David Hahn’s slightly cartoony depictions as always fit the tone of this story. His visuals are manic, and they do justice to the ideas that Hastings has presented throughout this series so far. The feel is almost classic Archie. Highlights include Steve’s jump onto the helicopter in the middle of a rainstorm and Steve depicting the accident that caused him to become the bionic man using a soccer ball and what appears to be a toy truck.

This series is different from other Six Million Dollar Man comics and it works. Steve is slightly more humorous than he’s ever been, maybe a bit cockier too. He still reminds you of Lee Majors, but it’s almost a cross between Steve Austin and Colt Seavers (his fall guy character) Christopher Hastings must be a fan of both shows. This issue has a couple of twists in addition to the fun and Steve winds up in…to be continued.