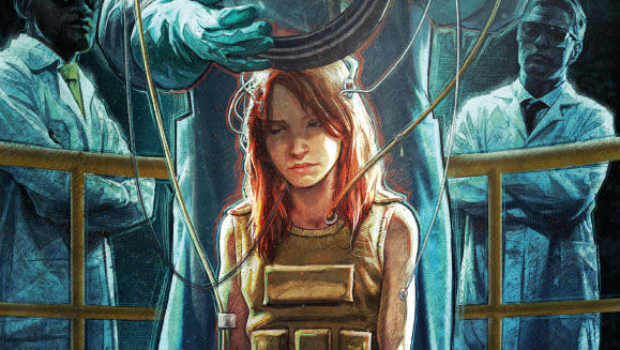 Dr. Brenner wants to assist in seeing Francine’s psychic abilities grow. This requires a descent into the isolation tank. She and the others are subject to the trials in Hawkins labs. Despite all their rage, they are still just rats in a cage. But will the pressure amplify her abilities or her resolve?

Jody Houser opens this issue with our protagonist being lowered into the tank under supervision from the good doctor. After all the trouble they go through to see the future, all they get from Francine is a desire to eat waffles. It’s a decent chapter in this tale of science gone awry. What makes it worth reading is Francine’s doubts about the experiment and Brenner’s frustration. Are they wasting time trying to get Francine’s vision of the future? The mystery unravels slowly, and we get a tense feeling, like Francine, is hiding something, or that the experiment isn’t going right, to begin with. This keeps the reader’s interest in the issue right up until the end. Great stuff includes the fate of nine and a poor lab tech’s unexpected reaction to it.

Salazar and Champagne bring a certain drabness to the laboratory that fits the narrative as the day to day routine of experimenting on the children become so monotonous. The pages come to life when the experiment goes awry, and their illustrations become serious as the progress of the evaluation of each subject continues. Highlights include the splash page of Brenner’s experiment montage and nine’s gaining the use of her ability.

Watching these “scientists” continue using human guinea pigs for their inhumane experiments gives us an uneasy feeling even as the good doctor assures our protagonist that he would never let harm come to her. We get the feeling that she doesn’t believe him even before she witnesses one of the experiments gone wrong. It’s another case of man’s inhumanity towards man which makes the end of this issue understandable as the characters consider an act of desperation when…to be continued.