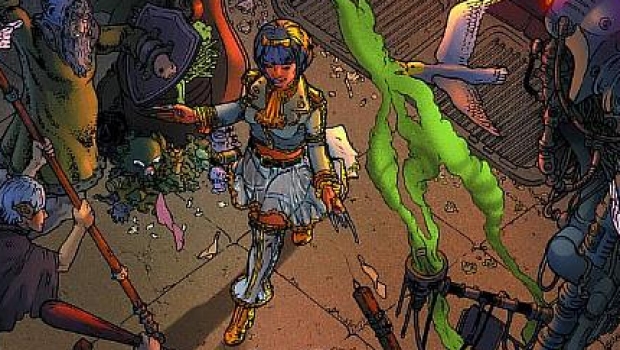 SWIPE tells the story of Ray, a hacker who is on the run from a deal-gone-wrong and in entering a raunchy establishment Ray meets the dancer, Karina. Karina is a one-in-a-million self-aware robot, which means she has a lot of tricks up her sleeve, tricks she is not even aware off, and all she wants to do is dance, dance and dance.

Ray immediately perceives Katrina’s potential and makes sure an alliance is formed. This alliance will turn out to be much more in the course of the story, with Ray becoming more infatuated and Katrina becoming more human even. But let us not get ahead of the story of these two (which would be marked as a spoiler) but return to the rest of the story at hand.

Imagine cyborg pimp’s, shady mobsters and the whole city as a launch point to a nanotechnology invasion which turns people into zombies, corrupting the programming of machines and bringing about cyborg/zombies in many forms and sizes. And smack in the middle are Katrina and Ray as savers of mankind.

This cyber-zombie invasion madness, is collected all in one graphic novel: SWIPE, from Angry Viking Press. And Angry Viking Press made sure that this story is original, the characters are unique and above all, you will be happy to purchase a quality book.

The art is detailed and amazing at points, with some anatomic oddities but all can be overlooked because… well… the overall idea and the complete book is Indy in nature and you just will not get Marvel or DC artists. But the coloring by Jay Moyano and Eshter Salguero on this book is astonishing, making sure all the insane details of artist (and co-creator) Bryan Randall are shown in all its glory. Park Cooper is the other co-creator and writes a sweet story in which everyone just has to love the fairly dumb-blond routine of Katrina and together with the sympathetic and reputation-above-all Ray it feels like a matched made in neo-Heaven!