Attorney Peyton Parks has been given the power of the Black Knight. Now she walks a thin line between her legal work and vigilantism. This issue brings into the heart of the Griogor Crime family.

The fab four are heating things up for Peyton Parks as she might have bit off more than she could chew this time. The corpse discovered by authorities raises more questions than it answers. They’re having trouble determining cause of death. These writers are bent on making things difficult for our protagonist which brings us deep into the heart of an intriguing mystery. We are drawn in by the degenerate way the crime family gets rid of its “mistakes” and wondering what could have happened to cause this particular body (no spoilers) to wind up the way it did. Great stuff includes the banter and comradery between Peyton and her family and friends also we finally get the battle we’ve been waiting for between the Black Knight and Sirin

Sergio Arino does great work in this issue bringing us an antagonist worthy of this series protagonist. Zenescope brings us some of the best artists in the business and Arino gives us some great panels that are just the right touch of tradition and innovative story telling styles. highlights include the opening splash of the crime scene and, of course, the battle between Black Knight and Sirin.

The Black Knight is turning into one of my favorite series in the Zenescope canon. She is tough, yet tender when she wants to be. I love her secret identity as an attorney. It’s a refreshing change from all the reporters out there. And the conclusion of this issue is truly shocking as Sirin…to be continued. ***1/2 (8.6 rating) 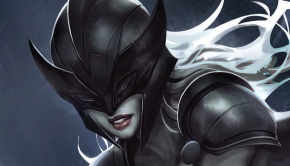