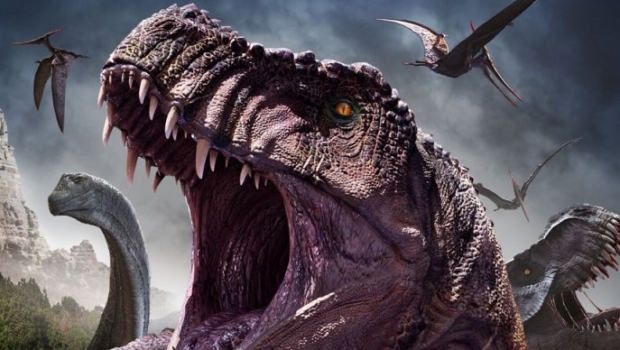 In the future, criminals on death row have the chance to win their freedom by competing in a virtual reality game pitting themselves against each other in a series of challenges all the while being hunted by various dinosaurs or giant creatures all for the enjoyment of the viewing public. While connected to the VR system, if they die in the game they die via lethal injection in real life.

The main story revolves around one convict (Tucker, played by Adam Hampton) who claims he was set up and falsely accused of the murder of his wife, who wants nothing more than to prove his innocents and get back home to his children. The other 9 convicts just want their freedom and will do whatever they have to in order to get it. While the secondary story revolves around the games themselves and how not everyone is a fan, with a group who wants them to be shut down completely.

If you’re a fan of movies you can see the influences straight off. Mix ‘The Hunger Games’ with ‘The Running Man’ add some of the political undercurrents right out of ‘The Purge’ and a bit of the entertainment at all costs of the ‘Death Race’ films with the seemingly universally loved dinosaurs and you have this film.

Let me be honest…I LOVE low budget films. I’ll take a B or C grade movie over a major studio blockbuster any day of the week, so my acceptance of budget constraints, acting/directing ability, non-Hollywood quality CG efx and the over-all feel of films are somewhat skewed by this enjoyment. Is this a good film? It’s serviceable. It doesn’t create anything new, it doesn’t progress the genre any but for a time killer it’s not bad at all. You know what your getting and it delivers that. The story is straight forward without the twists and turns you sometimes need in this style of film. The bad guys are bad, the good guys, such as they are, are good. If you pay attention you know whats coming with pretty much every character and even though you know the outcome, for some of the characters you can’t wait for the payoff to happen to them.

There was a lot of story that could have been developed from this, more so of the  things just hinted at broadly that I found more interesting than the main plot. Mostly the movement that hates what the games are. There was just a rich seam of plot that could have been mined if handled differently but this is a low budget actioner that people enjoy just to watch people get killed in interesting ways and not a political thriller with psychological underpinnings dealing with the current state of celebrity obsession, tv ratings and reality shows.

Could they make a sequel? Sure, like I said there was a lot left undealt with that could make for a far more interesting film if handled/developed right. But what do I know? I’m just a pop culture nerd writing about things and not making any of my own.