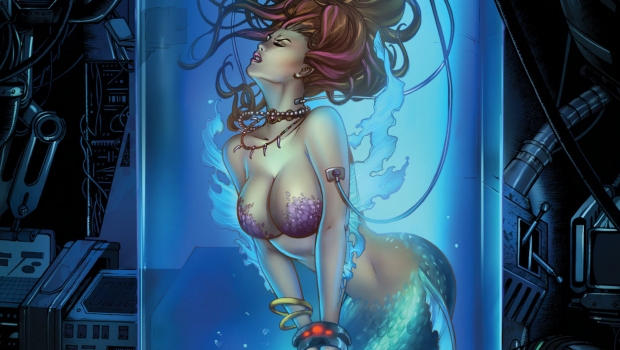 Once upon a time there was a young mermaid who dreamed of marrying a human prince, and living happily ever after. In some versions of the story she achieves that goal; in the original classic, written in 1837 by Hans Christian Andersen *spoiler alert* she doesn’t live happily ever after, she contemplates murdering the prince so she can remain human, decides not to, turns to sea foam and dies.

Which brings us to our heroine’s latest iteration, in Zenescope Entertainment’s The Little Mermaid #1, written by Meredith Finch (Grimm Tales of Terror, and current chronicler of Wonder Woman’s adventures for DC Comics) and illustrated by Miguel Mendonca (Warlord of Oz, Grimm Fairy Tales Unleashed). This time around, the mermaid is named Erica, and she’s the twenty-year-old hybrid daughter of a human woman—the aptly named Ms. Fisher—and the princely merman who rescued her from a storm-tossed sea. She may possess her mother’s beauty and her father’s aquatic strengths, but Erica also has the power to shape-shift from human to mer-form and back again. And that ability to be part of both worlds (see what I did there?) has brought her to the attention of a mysterious scientific organization that would love to see how she does that—even if it means gutting her like…well, you get the idea.

Story-wise, Finch does a good job, though this first issue is mainly setup. In 22 pages we meet Erica and see her in peril; we meet her mother—first in a flashback to establish Erica’s backstory, then again in modern times as she worries about her now-missing daughter; we briefly see the bad guys; and we meet the Sea Witch, who knows all about everything. It’s light in character depth (no pun intended) but interesting enough that you’ll want to see what comes next for Erica and her cast.

However, it’s really Mendoca’s art that holds your attention (especially if you’re a regular visitor to Comics for Sinners). Of course his women, including the Sea Witch, are stunningly beautiful—it is a Zenescope comic, after all—but his storytelling skills are top-notch and confidently dramatic. His art alone is worth price of admission.

Bottom line? An intriguing story, combined with great art, make this Little Mermaid a heroine and a miniseries worth checking out. Just don’t expect to find any Jamaican-voiced crabs or song-and-dance numbers in its pages!