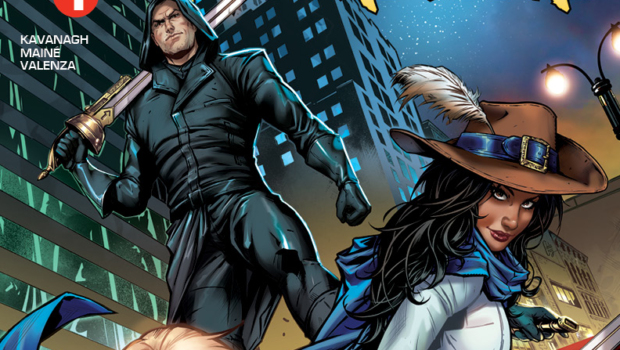 This issue starts by explaining that the Musketeers are humans who have been transformed by the book of fables and that people aren’t quite sure what to think of them. Are they heroes or villains? We’re introduced to the characters and get a taste of their powers: Winter Suoam, an athletic woman with superhuman speed and agility. Diego Garcia, A powerhouse who is super strong. And finally, we see Carmen Alexander who is an expert with the sword.

Joe Brusha and Terry Kavanagh waste no time flying into action with the opening pages showcasing our hero’s unique abilities. We learn that the title characters were trained by none other than King Arthur and his entourage including Merlin the Magnificent. I really enjoyed this mish-mash blending of the two legends and the interesting takes on the characters created by Alexandre Dumas and adapted by T.H. White. It’s a fun read and great stuff which includes our anti-heroes appearing in Philadelphia and the local police trying to take them down. The interaction between the characters as we get to know them and see each one’s motivation. Also, the fun of trying to guess who’s side they’re really on. The battle cry Musketeers Murder seems a bit drastic and one of the characters lets us know that they will work on it!

Daniel Maine knows how to adapt a Zenescope title and his pencils showcase over the top battle scenes on par with anything this company has done. Highlights include the opening splash where our heroes facing various creatures of legend and the overall battle scenes which bring us directly into the story in a harrowing way. The scene where the protagonists teleport to our world also stands out. Fantastic action as only Zenescope can bring it to us.

Zenescope continues its fine tradition of updating ancient legends and folk tales and bringing them into comic book format and also transporting them into the modern age. This issue is simply a set up and we’re given the standard plot device of finding the thingamabob and getting it to the whatchamacallit before the gobbledygook happens, but its definitely a great read and right now could go either way but I’m confident in the folks at Zenescope, they know how to milk the formula while creating interesting back stories and characters *** (7.8 rating)