“It’s like our own march of the penguins.” – Gordon.

Star Trek fans have been waiting patiently for a new Star Trek series. For a minute, the Bad Robot Kelvin Timeline was all we had. I enjoyed these movies, but there was something missing. The J.J. Abrahams people traded our space drama with thought-provoking plots and twists for action and adventure. Abrahams freely admitted that he was more of a Star Wars fan than a Star Trek fan, and it showed. So, we anxiously looked to CBS as they promised us a new series, Discovery. This became a mixed bag as they had new actors play iconic characters Sarek, Spock, and Captain Christopher Pike. They clearly got Sarek wrong (though James Frain does as good a job as any actor could with the role.) But Anson Mount gave us hope as a spot-on Captain Pike. (I so want a Pike series, but please don’t give it to Alex Kurtzman.) The Discovery people decided to go dark and gloomy and made an R rated series which split the fandom and it became the least watched Star Trek series in the history of the franchise. But now we come to the Orville, which is watched by most Star Trek fans and does a better job of showing the bright hope for the future theme as envisioned by creator Gene Roddenberry, now, here’s the comic book. Will it live up to expectations of a good Star Trek/Orville comic book?

David A Goodman opens this issue with a dream sequence where our good Captain lusts for his first officer and ex-wife, Kelly Grayson. The editors note places this issue right after the first season episode Mad Idolatry. Then Captain Mercer and Lt. Gordon take a shuttlecraft to answer a one-hundred-year-old distress call and we see the playful banter that we’ve come to expect from these two as Goodman shows us how much he loves this TV show and gets the characters down pat. In a humorous subplot, the Moclans have a child named Topa who want to send the child to school, even though he’s only eight months old, yet his maturity level is on par with a human child of seven years. I’m really having fun with this issue and it captures the feel for the TV series in a great way. The story, as most set up stories go, is slow to start but it’s so much fun, and the guest aliens in this issue are a real hoot. I’m enjoying each page.

The other David, Cabeza, captures our heroes perfectly. It’s also a bright issue for a modern sci-fi comic, for some reason today’s science fiction, in both cinema and comic book format, are dark and gloomy, some of them unwatchable and unreadable. Cabeza knows that the Orville started as a parody of Star Trek, but now commands a good portion of that audience as fans and the show has come along way from its first season until now. Therefore, he avoids the cartoony style of many artists who might be tempted to approach an issue like this in that manner, it’s a realistic take on a show that’s starting to come into its own. Technically, Discovery is a better-made show with a bigger budget. But for character-driven narratives, I must go with The Orville. It’s actually fun and the characters are people you can care about and this title captures that with both the writing and illustrations.

Just so everyone knows, I don’t hate Discovery and I gave the first season episode a good review, but I did become disappointed with the show as the writers didn’t seem to “get” our Vulcan first family. But I’m now enjoying the Orville more and this comic is a great adaptation from people who seem to follow the series and love it as much as I loved the original Star Trek series. I’m only a casual fan of both Discovery and Orville, but I enjoy Orville a lot more, after two seasons of both shows. This issue is a great set-up and the end brings us a shocking revelation of what brought the Captain and his friend to the planet’s surface and the aliens are a pacifist society, not used to the violent ways of off-worlders. The aliens are almost a parody of the Halkans from the Star Trek TOS episode Mirror, Mirror, if that society had gone to the birds. loved this comic ***1/2 (8.8 rating) 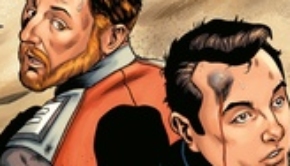