I love comics that bring back classic TV and movies. Dynamite, Boom, Titan and anyone else that takes a chance on a fondly remembered franchise. Even one that didn’t last too long, like the Prisoner. Although it only produced about 17 episodes in 1967. The show has as strong a following as Star Trek and Dr. Who. Fiercely devoted fans help keep this show going strong and Titan has taken the chance on pleasing fans of the original and drawing in new fans as well. The story focuses on a spy named Breen who is being accused of acting like a traitor.

Peter Milligan brings us agent Breen. A spy whose questioning his loyalty’s and his devotion to the mission at hand. When he’s asked to do something that he finds unethical, he tells his boss that he’s not going to do what they want him to do. This leads to a scuffle and Breen drowning his sorrows in a pub. Milligan creates an atmosphere that evokes the original while also bringing the characters and situation into the present day. Great Stuff includes Breen decking his superior when confronted with said unethical task and Breen’s cover being blown and his having to return to base with the mission unaccomplished. I really enjoyed the direction Milligan is going with this title and Breen is a character we can relate too. The era is modern but when we arrive at the village, it hasn’t changed a bit.

Colin Lorimer helps to create the atmosphere with his depictions and the way we are introduced to these characters and their mission is top notch. Breen’s expression on the wanted poster says it all. He knows that he’s no traitor and he feel betrayed by the agency that he daily risked his life for. Highlights include the opening page where Breen crashes through a window to his safety. Also, the splash where he realizes that he’s been drugged. This title is what I’ve been wanting for a long time.

There have been several attempts to resurrect the Prisoner, all with mixed results. In 2009 there was a 6-part miniseries starring Ian McKellen, Jim Caviezel and Hayley Atwell which received mixed reviews, then there was an audio drama in 2015 from Big Finish Productions. DC Comics gave us Shattered Visage which received critical acclaim and Marvel also got on board with a Jack Kirby adaptation of “Arrival” but it was never published. However, I do believe that fans of the original can appreciate what this team is doing and get on board while new fans might have their curiosity peaked and check out the original TV Series. Overall, a satisfying return to this franchise. 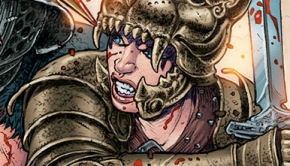