The story of The Surgeon is set about 15 years after the world fell apart. Think radiation, think Mad Max, think super-storms instead of seasons…

Meet Jenny Hannover, a nomadic physician who is trying to balance her calling as a healer with the necessity of killing for survival.

In Chapter 1, Turtle Island, we have followed Doc Hanover as she answers a call for medical help that takes her to the South Dakota’s Black Hills, where she finds a surprisingly prosperous and peaceful fort.

In Chapter 2, The Siege, Doc Hanover is doing well in the South Dakota’s Black Hills, where she fights off the first wave of attackers almost single-handedly but the real Siege is yet to come.

Created and written by John Pence, The Surgeon has now been brought to life by the Unlikely Heroes Studios team! Zack Dolan, Laurie Foster, Eve Orozco, and Erek Foster are bringing you this adventure of guns, swords, fists, booze, scalpels, laughs, and maybe a few portions of fish&fries.

Like I said when reviewing the First Issue, “the intensity on each panel and the clarity of colors, combined with some nifty details in each panel, immediately strike outward. This book has just the right balance on an Indy-comic feel (independent, thought-through, non-franchise, non-superhero) without lacking in the art-department, which sometimes is the first gripe in picking up a new book.”

And like I said earlier: it is not a Geoff Darrow intensity nor an Amanda Conner funny-ness, but this is a beast all on its own, really. And it continues with a bad-on in the second issue, where the fortress is really under siege. And #3 will be the big showdown, I guess.

The story remains strong, although it is now much more action-driven, gore-infested at times even. Doc Hanover remains a strong persona but we reach a new understanding as well as the rest of the group she is hanging with. We even get a more indepth understanding about the new group of enemies, called the Hot Animal Machines and believe me when I say, those are some disturbing man-made demonoids!

Strong story and stunning art. This is a keeper, folks!

All in all, this IS that gem in your collection, this gem that you will want to show others.

To share comics is to love comics. n’est-ce pas?

Currently you can get it on Patreon: www.patreon.com/uhstudios with
print copy pre-orders directly from us (hero@uhstudios.com).

It should be up on Comixology in the next month or so
https://www.comixology.com/The-Surgeon/comics-series/110969?ref=cHVibGlzaGVyL3ZpZXcvZGVza3RvcC9saXN0L3Nlcmllc0xpc3Q

And it is available on Kindle:
https://www.amazon.com/Surgeon-Chapter-Two-Siege-ebook/dp/B07G7NWTPB/ 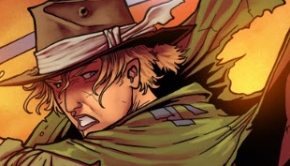