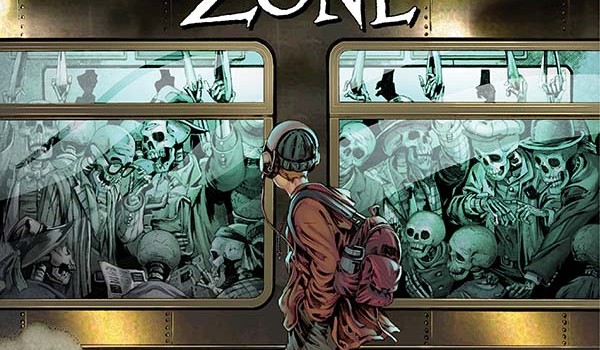 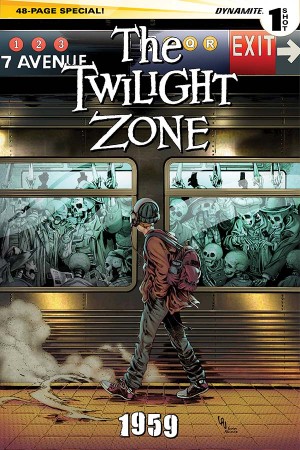 I remember watching the Twilight Zone when I was barely able to crawl. Great writing, twist endings and, for a time, the only sci-fi anthology on the air. Oh, I know, there was always The Outer Limits, which was a great show, but it didn’t last. TZ gave us five years at a time when Science Fiction didn’t last long on TV. Some of Televisions best actors gave us a TZ or sometimes 2, or even more, I believe Burgess Meredith has done more episodes (4) than any other actor. so, I love the Twilight Zone. The great thing about independent comic book companies is that they keep the old franchises alive and Dynamite does a better job of adapting their franchises then most of their competition. But now, on with this issue:

A collection of anthologies starting with:

1) Laughing Matter which features a mean old curmudgeon bank president Coddington Buckley III. Think It’s a Wonderful Life’s old man Potter on bath salts. In many ways he reminds me of “Herod the Great” in that Coddington has a son that works for him at the bank and you know the old saying “It is better to be Herod’s pig than his son” How long can his son put up with the old man’s abuse? Read on and find out!

2) Initiation. How far will you go to fit in? One young boy, who’s not like the rest, wants desperately to fit in and is willing to do whatever the other boys his age (around 10) tell him to do. Boys will be boys and each step of the initiation becomes worse than the one before, will the boys go to far before it’s to late? Read on and find out.

3) Dr. Richard Frederickson. Are comic books dangerous? A Psychiatrist on a holy crusade to get rid of comic books tries to convince the masses that comic books are a bad influence on our nations youth. Yes it is so blatantly obvious that he’s Dr. Fredric Wertham. A clever story that incorporates real examples of attempted censorship throughout history; book burning, regulating entertainment and monopolizing as well as profiting from public fear. Well, this Psychiatrist, with the help of a colleague, Harry Madsen succeeds beyond his wildest dreams, or does he? Read on and find out.

All in all a satisfying collection that would have made Rod Serling proud.