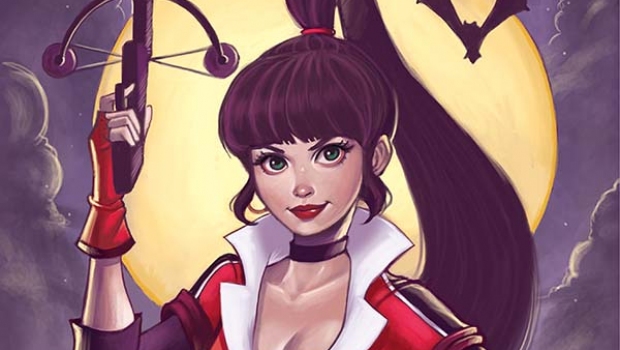 Dynamite Entertainment is providing the world with a new start of Vampirella with Vampirella Vol. 3 #1, in stores March 2, 2016.

Our story opens when an actress is on her way to a film shoot at 4am. She’s discussing the days shoot with someone, I assume is her boyfriend, on her cell phone. The young lady arrives and is told to leave her cell phone in her car as it is a closed set. She obliges and lines up with the other actors. One of the actors points out that there is no camera. The director yells action and all the actors commence to running.

We cut to the star of this comic book, about to settle into, what else? an old dark mansion. She stops to fight off a few demons and winds up depicted on the news in her traditional bikini, so, for this tale anyway, she comes up with a new costume.

Vampirella’s face was not seen in the news story so she won’t have to worry about anyone recognizing her. Other than the page where she’s wearing her traditional costume, this Vampirella probably won’t be recognizable to fans of the old Warren magazines, but it’s still a lively first issue that keeps one guessing. Once the story continues I’m sure it’ll become recognizable to even fans of the classic tale, but for now, let’s concentrate on this issue.

Kate Leth‘s introduction to the character leads one to wonder what the opening scene has to do with the rest of the issue. It is seemingly unconnected to the goings on at the mansion, but by the end of this issue we start to see a connection and Slade, the casting director of the aforementioned movie, issues a “Welcome to Hollywood” to our protagonist.

Eman Casallos art reminds you of classic Vampirella tales without being derivative of it. The art is fresh and bold, signaling that this is a new version of our favorite female vamp. Casallos renders the characters with a modern sensibility and yet has a respect for the traditional characters that you seldom see in the big two comic companies.