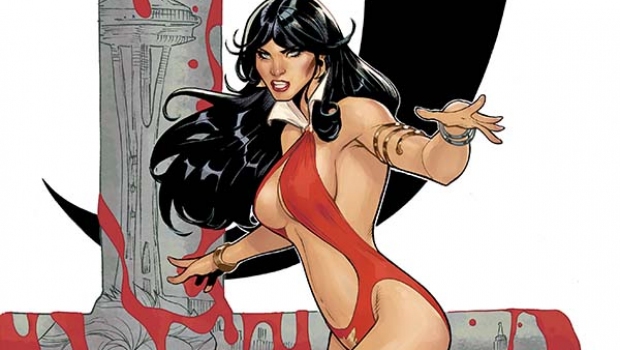 “I’m probably going to annoy the fans of Vampirella because I insist on putting clothes on her. You know, I worked with Greg Rucka for so long that folk should know that I generally don’t go for titillation.”—Eric Trautmann, 2010*

“Vampirella’s slingsuit is as much a part of the character as her fangs. When you’re dealt a hand like that, the only thing you can do is to Own It. Wear the Hell out of that thing, Vampi. You go, girl. And it’s up to me to write stories where her costume isn’t the only thing compelling readers to pick up the book.”—Nancy A. Collins, 2014**

First off, let me say right from the start that I’m a longtime fan of old-school Vampirella: the outer space vampiress who fell to earth from the planet Drakulon, where blood was as plentiful as water; whose kinsman was Dracula; whose boyfriend and his disapproving father were descendants of vampire hunter Abraham Van Helsing; who travelled the world performing low-rent magic shows with an alcoholic illusionist; and who spent every waking moment dressed in little more than black, stiletto-heeled go-go boots and a bright red swimsuit that looked like a pair of narrow suspenders attached to a bikini bottom—and which very few people ever seemed to take notice. All those quirks are what made Vampi such an enjoyable character.

(Don’t believe me? Then take a look at my critically acclaimed graphic novel Lorelei: Sects and the City, in which a succubus battles a cult of Elder God–type worshippers. It’s my tribute to Vampirella and 1970s horror comics, with a 21st-century twist.)

When Harris Comics took control of the property in the 1990s, helping to launch what became known as the notorious “bad-girl era” of comics, that all changed as they tried to make Vampirella a superheroine. The closest they came to innovation was the Kurt Busiek–scripted miniseries Vampirella: Morning in America, which introduced some intriguing dark-fantasy concepts that were quickly forgotten by the writers who followed him, except for one unnecessary retcon: that Vampi wasn’t from outer space, but had been convinced she was. A notion that took away what made her unique—robbing her of creator Forrest J Ackerman’s space-age tribute to Barbarella and the movie Queen of Blood, in which he appeared—and for the most part turned her into a humourless, run-of-the-mill vampire hunter (the 1997 Warren Ellis-Amanda Connor miniseries Vampirella Lives being the exception to this rule).

That tradition continued after Harris sold off the rights to Dynamite Entertainment, made worse when writer Eric Trautmann (quoted above) made it clear that T&A books weren’t his thing and he was going to do his best to make Vampirella respectable. Job #1: ditching the costume that was synonymous with the character. Yeah, that was a good plan. Trying to play politically correct games with a vampire whose main powers are seduction and a body straight from a Victoria’s Secret fashion show turned out to be a waste of time, and a slap in the face to Vampi’s longtime fans. It also didn’t help Dynamite any to have the storyteller express contempt for the long-established design of the character he’s writing before the first issue even hit.

Trautmann was a bad fit for Vampirella. Bram Stoker Award–winning author Nancy A. Collins, with her lengthy pedigree in horror and comics like Swamp Thing, Red Sonja: Berserker, and Predator: Hell Come A-Walkin‘, is very much a good one.

Nancy A. Collins gets Vampirella, in a way Trautmann never did. Collins understands that what makes Vampirella stand out from the average vampire—even more, from the average comic book character—is that gloriously ridiculous costume she’s been wearing since her debut in 1969. It is part of her character, and Collins is not embarrassed by such things as leading characters with odd clothing choices—after all, she wrote 1995’s Friday the 13th meets Texas Chain Saw Massacre crossover comic miniseries, Jason vs. Leatherface, and Leatherface’s mask is made of human skin! In Vampirella’s case, the job of the storyteller is to provide an entertaining story, while still providing fan-service eye candy.

So, in Vampirella #1’s untitled story (I’m sure Dynamite will think of one for the title of the trade collection), we’re introduced to Mrs. Baxter and her daughter Emma, who by page two has been kidnapped by the Cult of Chaos, a fanatical organization dedicated to unleashing the Elder Gods they worship. They’re also Vampi’s #1 enemy, dating all the way back to her Warren-era days, along with their leader, Ethan Shroud—whose spirit now possesses Emma’s father. It’s a debut issue that hits the ground running, ultimately leading to the revelation of Shroud’s latest plan for world domination—and how Vampi will be the cog that sets everything in motion.

However, I have two complaints about Collins’s debut issue. For one, like most writers who have crafted Vampirella stories in the Harris and Dynamite eras, she does nothing to provide Vampirella with a personality. “Ella Normandy” (a nice tip of the hat to one of Vampi’s identities used in the Warren-era stories) is presented here as an attitudinal ass-kicker who gets aimed like a gun by the Vatican at whatever target they want eliminated—in this case, Ethan Shroud. But other than her anger, and her businesslike manner in dealing with Mrs. Baxter, there’s no depth to the character—even with her costume, this version of Vampi doesn’t stand out from the average vampire.

Sure, at times the Warren-era Vampi could be downright silly—her story arc as a Hollywood starlet undoubtedly the lowest point in her adventures—but it was her romance with boyfriend and vampire hunter Adam Van Helsing, and her friendship with alcoholic magician and comedic sidekick Mordecai Pendragon, that balanced her dedication to battling monsters and cultists. Considering Collins is a talented, award-winning writer—whose post–Alan Moore run on DC’s Swamp Thing deserves the collection it’s never had—hopefully in future issues we’ll get past the one-note monster hunter seen in this relaunch and watch Vampi become a more well-rounded character.

(It may just be an influence of Collins’s most famous character, kick-ass vampire turned vampire hunter Sonja Blue, on the writing. Sonja debuted in the 1989, Bram Stoker Award–winning novel Sunglasses After Dark and has returned in a recent series of e-novellas.)

The other complaint is that, as first issues go, the story does nothing to introduce Vampirella to new readers; if you’re unfamiliar with her Dynamite-era background as an agent of the Vatican’s Cestus Dei organization, or Vampi’s background in general, well…too bad, apparently. It pretty much picks up where the last series left off and makes no attempt to clue you in on what’s come before. I was hoping for a fresher, more inviting approach.

On the art side, penciler Patrick Berkenkotter (Dynamite’s Project: Superpowers, Marvel’s The Torch) and inker Dennis Crisostomo (Marvel’s Emma Frost and Superior Carnage) are a welcome addition to the creative team. Given how low-rent the art appeared in the previous Vampirella series and its atrocious Pantha spinoff, Berkenkotter and Crisostomo are the proverbial breath of fresh air, bringing a dark energy to this first issue that firmly establishes Vampirella #1 as a horror comic. The one oddity in the new team’s art is their depiction of Vampi’s iconic costume—I’m not certain if they’re intentionally making the upper part of the “slingsuit” resemble puddles of blood on Vampi’s breasts, but it looks a little weird.

Bottom line? If you’re an old-school Vampi fan, or a fan of her recent adventures, then you should definitely give this a try. With Collins, Berkenkotter, and Crisostomo on board, this new series may be the shot in the arm that Vampi has needed ever since her Harris Comics days. Unfortunately, if you’ve never read a Vampirella comic and were curious about Collins’s involvement in the new series, I honestly can’t recommend it because this first issue, story-wise, is truly the antithesis of a “jumping-on point” for new readers. But the art is certainly top-notch.

**“‘Vampirella’s Slingsuit is As Much a Part of the Character As Her Fangs’: Nancy Collins on the New Vampirella Series,” Dan Abnett, Bleeding Cool, 4 June 2014