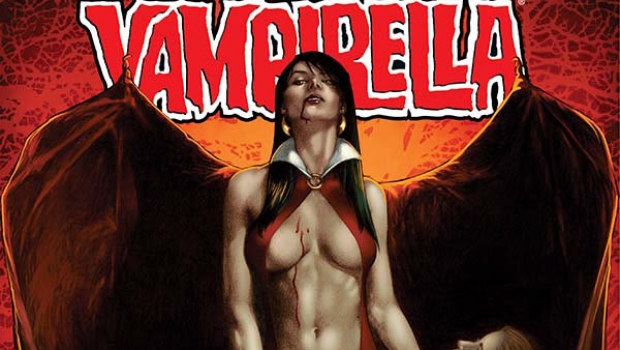 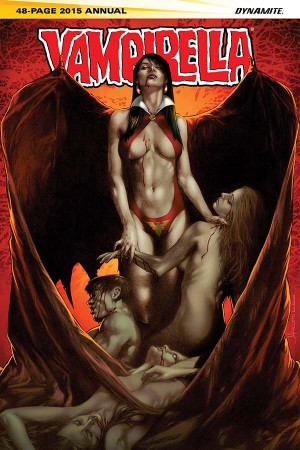 As a world-famous Time Lord once remarked, “It’s the end…but the moment has been prepared for…”

Vampirella Annual 2015, written by Nancy A. Collins (Swamp Thing, Sunglasses After Dark), illustrated by Aneke (Legenderry: Red Sonja, Steampunk Battlestar Galactica 1880), and published by Dynamite Entertainment, marks the end of Collins’s terrific run as chronicler of comics’ most famous female bloodsucker, wrapping up some plot threads left from the recently canceled Vampirella series and setting up Vampi and her supporting cast for whomever the next creative team might be.

In Collins’s thirteen-issue run we’ve seen Vampi forced out of her job as a vampire hunter for the Vatican, through the machinations of the Cult of Chaos, and then hunted by both sides; travel the world killing vampires and drinking their blood in an attempt to prevent her soul being devoured by the sister of Vampi’s oldest enemy, the Mad God Chaos; become the queen of the Nosferatu, a Transylvanian vampire clan whose members all look like Count Graf Orlock—and whose previous leader was her long-forgotten brother; encounter her evil-twin sister, Draculina; and discover that her never-before-revealed father is the honest-to-God biblical Cain, of “Cain and Abel” fame. And at the end of issue thirteen, Vampi decided she made a better vampire killer than a vampire queen and abdicated her throne.

To say the series hit the ground running and never stopped would be something of an understatement. But there’s still one last adventure left to tell: the epilogue (of sorts) presented in this Vampirella Annual.

Vampi prepares to become a field agent for The Kabal, a supernatural agency she met during the latest series, but before she can get sworn in, The Kabal is attacked by the Prometheus Society: a mad-scientists club consisting of Doctors Anton Moreau (from H.G. Wells’s The Island of Doctor Moreau), John Dee (a real-life, 16th-century occult philosopher), Caligari (from the classic silent film The Cabinet of Dr. Caligari), and Victor von Frankenstein (do you really need me to explain that one?). It’s another example of Collins displaying her horror pedigree, updating classic characters while retaining their nefarious origins—this includes one of The Kabal’s agents: Beatrice Rappacini, the star of Nathaniel Hawthorne’s 19th-century horror story, “Rappacini’s Daughter.” But don’t worry, comic fans, there’s plenty of action to be found among the literary nods.

Artwise, Aneke does a good job, though I preferred her work on Legenderry: Red Sonja more—her figurework here is a little stiff, and the pages suffer from a severe lack of light-and-shadow play needed for a horror comic. In all honesty, I was somewhat disappointed to discover that Collins hadn’t ridden off into the sunset (moonlight?) alongside artist Patrick Berkenkotter, her collaborator for all thirteen issues of the series, to make it a one-creative-team complete run of adventures. (Damn! And just when he’d finally learned to draw Vampi’s costume correctly! 😀 )

Bottom line? A good wrap-up to a great series, Vampirella Annual 2015 should please both longtime Vampi fans as well as fans of Collins’s writing. Be sure to pick up a copy. Where Vampi goes from here is anyone’s guess. 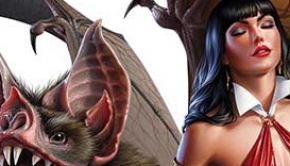 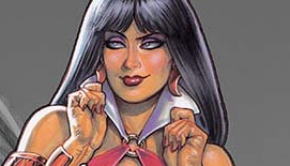