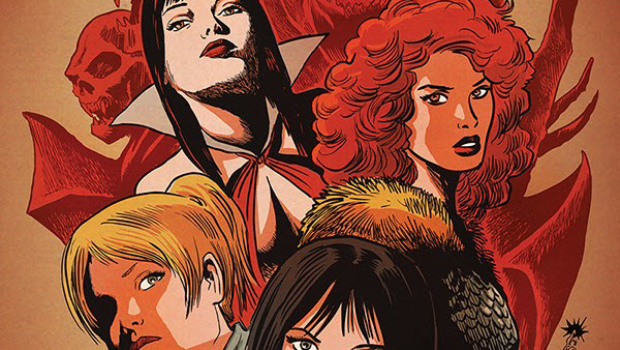 More noir style mysteries are afoot as Vampirella and Red Sonja arrives at the Riverdale Morgue. Though it’s not quite clear how they arrived in Archie’s city. Vampirella uses her Jedi mind-trick, or whatever, to goad the onsite Mortician to let them see a recent victim. Then Betty and Veronica show up as journalists working for their local High School on the case of the murder of their biology teacher.

Amy Chu piques our interest as this female team arrives in the town of Riverdale and deduces the murder of the biology teacher as the work of an organization called The Cult of Chaos. The two interdimensional travelers then go undercover at Riverdale High as foreign exchange students. It’s a fun introduction to this tale and it’s played for laughs. Though that may seem unusual since we’re dealing with a murder mystery. But in the capable hands of Amy Chu, this issue works. In a humorous scene, Red Sonja shows up the boy’s football team and lets them know her true strength. The balance between noir and humor is a delicate one and in less capable hands might seem more like a parody, but the tension weaves its way around the humor in an acceptable fashion and we’re given an original tale that keeps us entertained through issue one. Great stuff includes Red Sonja’s first meeting with Archie and the clues that lead Vampirella to deduce who the murderer(s) are.

Maria Sanapo brings a raw energy to this issue that has the alien female vampire and warrior from a forgotten land blend in with the average High School students in a unique way. It’s not an easy task but she makes everyone seem natural, including the fish out of water and the average yokels. You wouldn’t expect them to blend in together, but thanks to Veronica Lodges extensive wardrobe, it works. Highlights include the splash which introduces Vampirella and Red Sonja to Riverdale and the football tackle.

Dynamite comics is getting good mileage out of its franchises. It seems that there isn’t any type of team up they won’t try. I enjoy all my franchise mash-ups and this one is no exception. I’m not an avid reader of Archie comics, but when these strangers in a strange land are thrown into the mix it becomes a fun-filled adventure made even more interesting by the end of this issue with the discovery of… to be continued. *** (8.2 rating)