Sniegoski makes a mark in this second issue, heralding a War in Heaven with a truce between two powerful warring factions. A demonic threat is closing in on that truce and only one person can fend off that upcoming mahem. Our lovely Vampirella.

As is the case with any heroine, Vampirella reluctantly yet willingly agrees and then the writer concocts something really interesting in which he ties the elements presented in the first issue firmly together. Sniegoski is introducing a fallen angel named Janus into the fold of the story, and with Janus comes deprivation I thought only humans could aspire to. But I guess trading organs, be they heavenly or plain human, is always a booming business. The fact that heavenly organs can also be a trippy drug, exposing powers both angelic and demonic to its user, truly adds to the dark aspect of this book.

Vampirella still remains witty, strong, persistent, and as iconic as she will ever be, but the real trick up Sniegoski´s sleeve will be Janus. Janus’ backstory coupled with his own desires, as well as his newfound ally Vampirella, will be the real treat of this tale, I suspect.

Overall, Sniegoski delivers a tale as strong and iconic as Vampirella deserves and you really see the love for the character both in Sniegoski´s words and in the ravishing artwork by Johnny D.

The only items on my list that make this book NOT the best it should be, according to this wee reviewer, are twofold.

For one, I am missing a reddish garment, be it a blouse or a shirt, to “mark” Vampirella with. The fancy and huge necklace she has worn since the first Dynamite issue of the ongoing (#26 already) is noteworthy, but that brings me to the second twitch I have, which is the overall coloring. Each panel seems like it is done with only one color and that truly bugs me. When I look at random scenery in my surroundings, there are different items and colors that reward my eyes. I know that real life is not applicable in a comic, but when I look at a panel here and see everything in the same hue, that makes me wonder. And when the inside of a room is colored like some dirty alley, then that makes me wonder as well. And it is not a good kind of wonder.

The coloring only takes away a small part of the joy of reading this Sniegoski tale though!

To understand the ways of the fallen angels, Vampirella must seek out the assistance of Janus, a former soldier in the legion of Heaven, who walks the line between the damned and divine. But someone would rather the pair never meet, as a horde of street people—under the influence of a deadly new, body-twisting drug made from the blood of an Archangel—are sent to deal with them. Vampirella’s mission for Heaven could be over before it’s even begun. 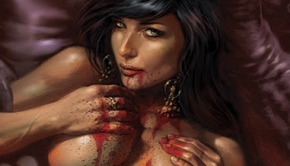 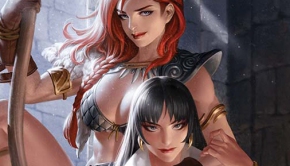