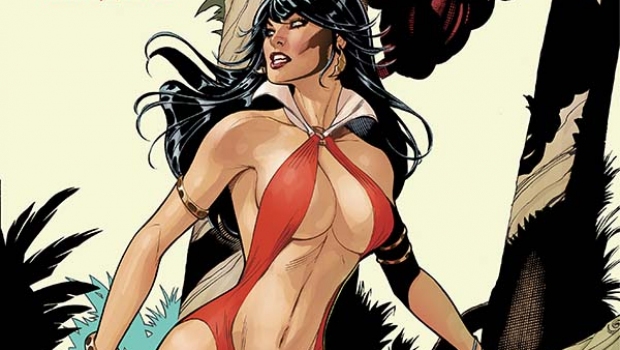 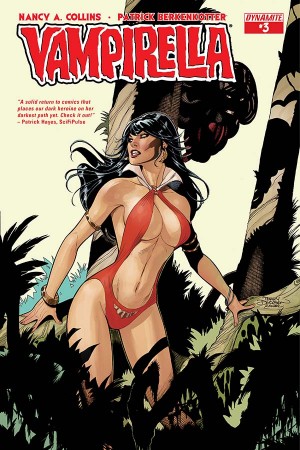 She was lured into a trap by her oldest enemies, the Cult of Chaos and its leader, Ethan Shroud, and selected as the new host body for Umbra, sister/lover of the mad god Chaos, in order to bring about the apocalypse. She’s lost her job as the Vatican’s number-one supernatural ass-kicker and taken the top spot on their list of monsters in need of elimination. And now Umbra’s in her head, spurring her on to do bad things—and what she’s saying makes a lot of sense…

But in the third issue of her relaunched series—written by Nancy A. Collins (Swamp Thing, Red Sonja) and illustrated by Patrick Berkenkotter (Project: Superpowers) and Dennis Crisostomo (Emma Frost)—it’s time for Vampirella to start turning things around before matters get completely out of hand. The only way to do that is by visiting a number of countries to kill different types of vampires and drink their blood. Will it prevent Umbra from possessing her body? Possibly not, but according to Vampi’s latest (and unexpected) ally, the Nosferatu named Drago, it’s the only way that Vampi will gain enough power to fight the mad goddess when she attempts to move into her intended spirit-home.

And so the Vampirella World Tour begins this issue with Vampi and Drago traveling to Thailand to hunt a local undead called the Krasue: a vampire that can detach its head and organs from its host body and fly around in search of prey. Its preferred dining choice, according to legend, is newborn babies, but when a delectable main course like Vampi makes herself available…well, how can any respectable monster say no to the invitation?

This fast-paced relaunch of Vampirella is what longtime fans of the character have been hoping for, with its nods to the character’s Warren Publishing past—in this, her 45th anniversary year—and its roots firmly in horror. For horror fans, vampire fans, and bad-girl fans, it’s a series that gets more interesting with each issue so definitely give it a try, if only to see that you can have well-written stories in a comic starring a half-naked female lead.