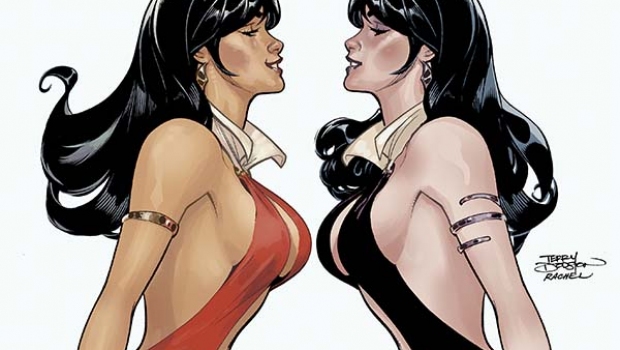 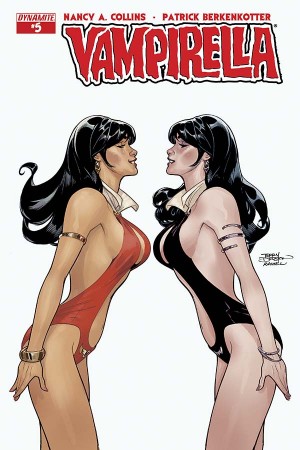 Vampirella’s Vampire-Killing World Tour races to its final destination this issue, as she stops by the Republic of Serbia to put down the mothlike female vampire called the Leptiricia (and drink its blood) before hopping aboard a train bound for Kruzstadt, Romania: home of the Nosferatu king—who also happens to be Vampi’s older half-brother! Talk about awkward family reunions…

Writer Nancy A. Collins and artists Patrick Berkenkotter and Dennis Crisostomo continue Vampi’s ongoing battle to prevent being possessed by the spirit of Lady Umbra, the sister-wife of her oldest enemy, the mad god Chaos, and with one issue left to wrap up this fast-paced story arc, comics’ leading lady of horror still has a lot of work ahead of her. The story and art remain as good this issue as they were in the first, but the story seems a little too fast-paced as it prepares for its final chapter, and some of the cultural references Vampi throws out are a tad dated: “Who’s his decorator? Ozzy Osborne [sic]?” (Filmmakers Guillermo Del Toro or Rob Zombie might have been more accurate.); “You better pray I don’t shove that overgrown sling blade up your ass, pretty boy!” (Sling Blade: 1996); “Can the chitchat, Burgermeister Meisterburger!” (Santa Claus Is Comin’ to Town: 1970. Vampirella watches reruns of holiday animated specials? Do today’s comic fans even get that reference?). Still, it’ll be interesting to see how the creative team wraps up this arc.

Bottom line? Vampirella fans should be pleased with seeing Vampi stomping monster ass while she’s learning the history of the Nosferatu (an action-packed yet educational comic!). Now bring on Lady Umbra for what’s sure to be an exciting conclusion!