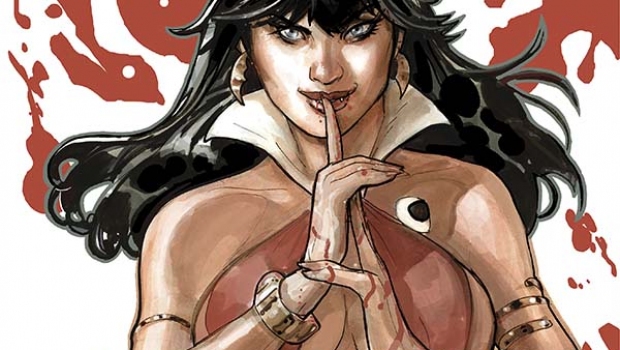 She’s traveled around the world, killing the bloodsucking progeny of Lilith, mother of all monsters (including our scantily clad heroine), and now Vampirella’s Vampire-Hunting World Tour comes to an end in this issue, as does her initial storyline under the stewardship of writer Nancy A. Collins and artists Patrick Berkenkotter and Dennis Crisostomo.

When we last left Vampi, she was about to face off against the King of the Nosferatu, who turned out to be Drago, the vampire who’d been helping Vampi on her quest—and who’s also her half-brother (thanks, mother of all monsters)! But Drago insists that his sole purpose has always been to provide Vampi with a way to prevent her body from being possessed by Lady Umbra, the sister-wife of the mad god Chaos. Just how is he going to aid Vampi in accomplishing this? To get the answer, she may have to fight through the forces of her oldest enemy, the Cult of Chaos, as well as her former employer, the Vatican—and still have Lady Umbra to deal with! Some days there just doesn’t seem to be any up side to being a half-naked vampiress…

Bottom line? A fast-paced story with all the badassery you’ve come to expect from this twenty-first-century version of Vampirella, that also closes the door on a part of her recent past while opening a new one to further adventures.

“Total Eclipse of the Heart”