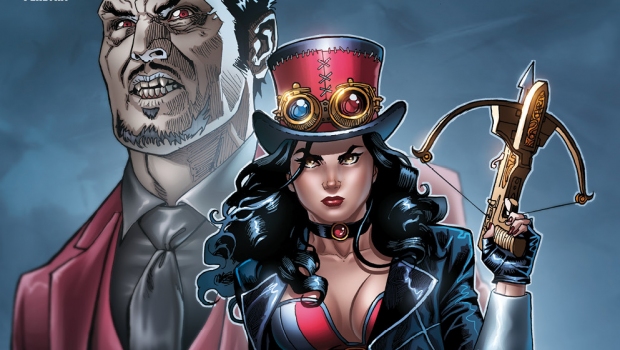 Van Helsing and Dracula: two names that go together in the horror genre like peanut butter and jelly…or vampires and crosses. Since author Bram Stoker gave literary birth to them in 1897’s Dracula, the vampire hunter and the lord of vampires have crossed paths innumerable times in books, comics, short stories, and movies—most notably in the Hammer Studios productions of the 1960s and ’70s that starred Christopher Lee as Dracula and Peter Cushing as Van Helsing.

And now we have the latest iteration of that classic match-up: Van Helsing vs. Dracula #1, written by Pat Shand (Charmed), illustrated by Michele Bandini (The Jungle Book: Fall of the Wild), and published by Zenescope Entertainment. The difference here, of course, is that since this is a Zenescope title, it’s not Abraham Van Helsing who has to battle the undead prince, but his sexy, badass daughter, Liesel—an immortal who’s been fighting Dracula’s followers for two centuries.

In this miniseries sequel to 2014’s Helsing: The Darkness and the Light, Liesel and her boyfriend, Hades (as in, the actual lord of hell), travel to London at the request of their friend Jonathan Harker, whose fiancée Mina has been afflicted with a frightening malady that involves bugs and spiders spilling out of her. And something that bizarre can only mean that Dracula is responsible for Mina’s condition. With Liesel on the case, much vampire ass-kicking is certain to follow.

Storywise, Shand keeps the action moving from first page to last, but does take time to fill in new readers (like me) on the backstories for Liesel and this issue’s plot without breaking stride. An even bigger plus is that he makes her a likeable character—when it comes to female leads, comic writers today sometimes seem to equate “badass” with “cold and one-dimensional.” But Liesel actually enjoys her work and, as we discover in one bedroom scene, has a habit of drooling in her sleep—y’know, like normal people.

Bandini’s artwork is nice, the style somewhere between cartoony and anime, and the facial expressions definitely convey the characters’ emotions, but I couldn’t help but come away thinking that if it weren’t for the work of colorist Walter Pereyra, the issue wouldn’t be anywhere close to the mood required of a horror comic. Still, the art gets the job done.

Bottom line? With its strong female protagonist and vampire storyline, Van Helsing vs. Dracula is sure to appeal to horror and comic fans alike. Give it a try. Just don’t expect to find Peter Cushing wearing a bustier and fishnet pantyhose. (Now there’s a mental image that will haunt you for days!)