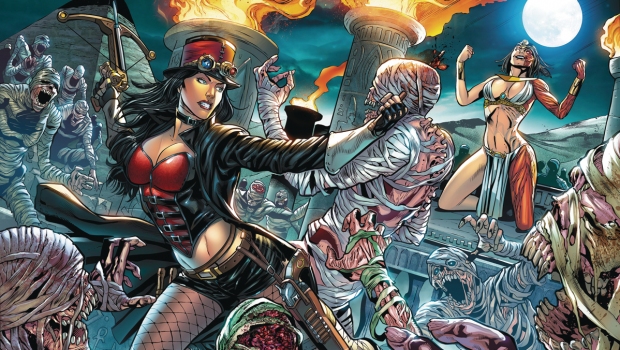 Here it is, the concluding chapter! Liesel’s war on the Mummy of Amun-Ra hasn’t exactly gone as planned. She had no choice however, with the lives of thousands on the line, war was inevitable. Now Van Helsing has been left for dead, trapped in a Sarcophagus. Has the Mummy done what Dracula and Frankenstein failed to do? Read on and find out true believer.

With the number of stories that Shand and Brusha turn out you’d think they’d get tired or stale by now, but you wouldn’t know it with this tale. Their work is unparalleled. Not that there aren’t writers as good or even better than them, but no one churns out the number of comic book tales as much as these two do, and yet they’re still creative. The characters are complex and not just two-dimensional caricatures. They know their craft and still deliver the goods. They are to writing what Jack Kirby was to art, hardworking go-getters, very few artists churned out as many comic books as Jack Kirby did in his life time and very few writers can keep up with the pace of Shand and Brusha. This is a great conclusion to a very satisfying tale I loved it. Action, adventure, a few plot twists and characters you can relate too.

Long time Zenescope contributor Marc Rosete keeps his pencil primed with another great issue. Roberta Ingranata handles the flashback scenes and they both work great together. Their panels keep the issue flowing and together with the writers the pacing is perfect. It’s a fast read with some breathtaking moments. The demon attack on page 10 is expertly handled and the splash on page 20 itself is worth the cover price. I generally enjoy most of the Zenescope comics I read and this was one of the best series in their canon. Highly recommended.

I never read a Zenescope comic until I started reviewing for Comics for Sinners. I’m so glad I started reviewing their comics because I now think that they’re one of the most under rated independent publishers in the medium. Some interesting introspective thoughts from the main character. As I said earlier, these are complex characters and they keep questioning what they do and why they do it. Like most of us they’re trying to work out the mysteries of life and question the things that happen to them. Relatable characters in a fantastic setting. Great Fun. **** (9.7 rating)

Van Helsing vs The Mummy of Amun-Ra #6