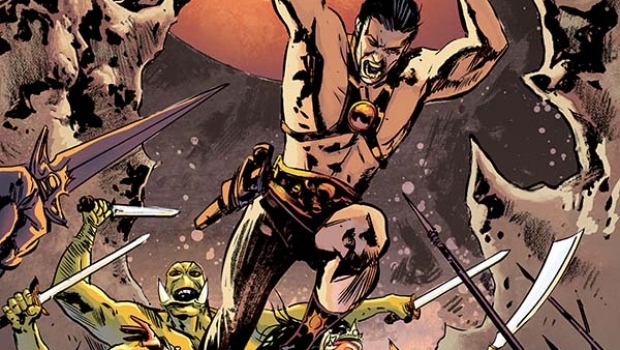 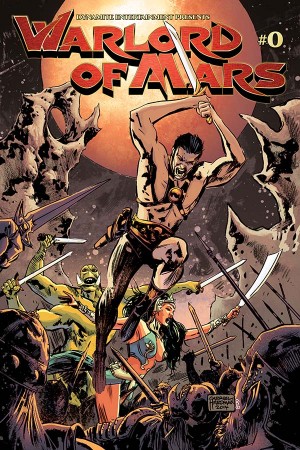 Ever since the debut of his series Warlord of Mars, Edgar Rice Burroughs’ “gentleman from Virginia,” John Carter, has found at Dynamite Entertainment the recognition and fan following that eluded him both before and after the release of John Carter, Disney’s disastrous 2012 film adaptation of A Princess of Mars, the first novel in Burroughs’s ten-book series. (Disastrous not in how the movie turned out—it’s actually pretty good—but in Disney’s slipshod handling of its marketing, which led to its box-office demise.) Sure, these days all the attention might be on Carter’s scantily clad Martian wife, Princess Dejah Thoris, who stars in the current miniseries Dejah of Mars, but John Carter can still bring the adventuring when he’s in the spotlight—as he does in his latest Dynamite Entertainment comic.

A done-in-one story, Warlord of Mars #0 is written by Matt Brady (Buck Rogers, Young Justice Secret Files) and illustrated by penciler Jack Jadson (Warriors of Mars, Red Sonja: Unchained) and inker Marcelo Mueller. Part thriller, part introduction to the character, with just a pinch of Alan Moore’s classic Superman story, “For the Man Who Has Everything,” the story uses the trope of the hero who insists that his “hallucinations” and imagined life—in Carter’s case, being an Earthman who travelled to Mars to become its greatest warrior and marry its most beautiful princess—are reality while everyone around him tries to convince him he’s insane. Naturally, we first find him in a mental hospital on Earth. Thankfully, Brady avoids any pitfalls by making this a character-driven tale, its strongest moment coming when the Earth-bound Carter, having been “trapped” for years on his home planet, realizes he can’t remember what his beloved Dejah Thoris looks like—and it breaks him.

As for Brady’s creative partners, Jadson and Marcelo do a fantastic job in rendering both earthly settings and Martian vistas with a lush style reminiscent of Kelly Jones at the artistic height of his Batman collaborations with writer Doug Moench. Moody when it needs to be, downright spooky when the situation calls for it, their art nicely complements Brady’s writing.

Bottom line? Warlord of Mars #0 is not only a treat for John Carter fans, but a good tale in general for new readers curious about this property that influenced a century’s worth of science-fiction and science-fantasy stories. Go give it a read.