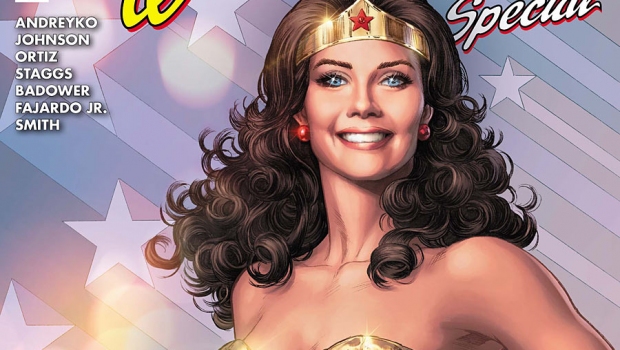 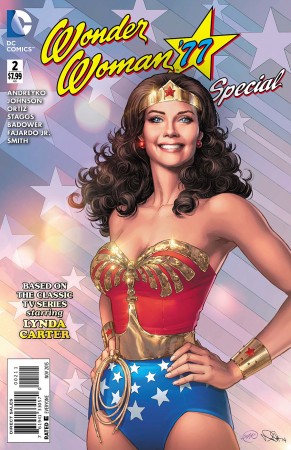 Hypnotic disco divas and misogynistic mind-controllers couldn’t overcome the superheroine called Wonder Woman, in the pages of her first 1970s-set comic special, so now the Amazing Amazon is back, satin tights and all, with Wonder Woman ’77 Special #2, which is written by Marc Andreyko (Batwoman, Chastity), and collects the three latest tales of the digital-first series.

As with my review, back in June, of Wonder Woman ’77 Special #1, a little background is in order for newcomers: The New Adventures of Wonder Woman was a live-action television series that ran from 1977 to 1979, and starred Lynda Carter, whose performance and beauty left such indelible marks on the character that, thirty-six years later, they have yet to be matched by any actress. As the first-episode story goes, after a three-decade absence following the conclusion of World War II (thus making the 1940s-set The New, Original Wonder Woman this show’s “Season 1”), Wonder Woman returns to the United States, and as Diana Prince becomes an agent for the IADC: the Inter-Agency Defense Command, a sort of government espionage agency. Her partner is Steve Trevor Jr., son of Diana’s old Nazi-fighting sidekick—not to mention the spitting image of his (now deceased) old man, since both roles were played by the same actor, Lyle Waggoner.

All that make sense? Good. Then let’s take a look at Diana’s latest escapades…

“The Cat Came Back”—with art by Drew Johnson and Richard Ortiz—involves an exhibition of Wonder Woman memorabilia being held at a Washington museum, and the hatred for Diana expressed by Dr. Barbara Minerva, the archaeologist whose own exhibition is moved out to make space for the far more lucrative WW lovefest. An accident with a sacrificial knife that Minerva is packing away leads to her transformation into a new version of the Cheetah, whose 1940s counterpart is someone we never saw in the days of The New, Original Wonder Woman, ABC-TV’s World War II–set series that preceded The New Adventures of…, but who’s apparently part of that continuity. The Golden Age Cheetah’s costume, as well as that of someone reminiscent of the Red Panzer—a Nazi villain introduced waaay back in 1977’s Wonder Woman #228—appear in the museum’s collection. (If it is the Red Panzer, that means that somewhere in television limbo, there must be an unaired episode of Lynda Carter fighting an armored Nazi with a Howitzer for an arm. Come on—cough it up, ABC!)

“Celsia 451”—illustrated by Cat Staggs—introduces a nuclear-powered villainess whose powers run hot and cold (read the comic; you’ll get the joke). Wonder Woman puts an end to her rampage, but then has an unexpected complication arrive in the form of The Atomic Knights (a tip of the Silver Age cap to one of DC’s odder heroic teams) who have orders to take out Celsia…and now Wonder Woman. Diana puts an end to that threat, as well.

“Wisdom of Solomon”—with art by Jason Badower—is an eight-pager that wraps up the special. From the title, you’d probably be expecting a guest appearance from DC’s Big Red Cheese, the original Captain Marvel (these days known as Shazam), since one of his attributes is possessing the wisdom of Solomon. You’d be wrong, though, because the super-strong character she encounters is none other than the living dead man, Solomon Grundy! Hijinks ensue, as the old saying goes. As with his work on the first ’77 Special, Badower’s photorealistic work brings Lynda Carter and Lyle Waggoner directly to the printed page. A pity the story isn’t longer.

Bottom line? Considering all the needless grim-and-gritty complications foisted on Wonder Woman’s origins and stories in her in-continuity comics, from the launch of the Nu52 to the present, longtime fans—especially those with a fond remembrance for Lynda Carter’s interpretation of the Amazon princess—may want to check out these lighter, more enjoyable tales, starring a version of the character who uses notions like sisterhood and love of humanity and a desire to better the world to defeat her enemies, not a sword and a warrior’s attitude. 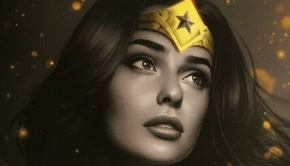 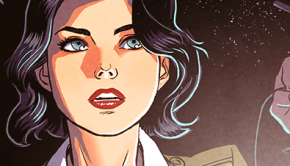