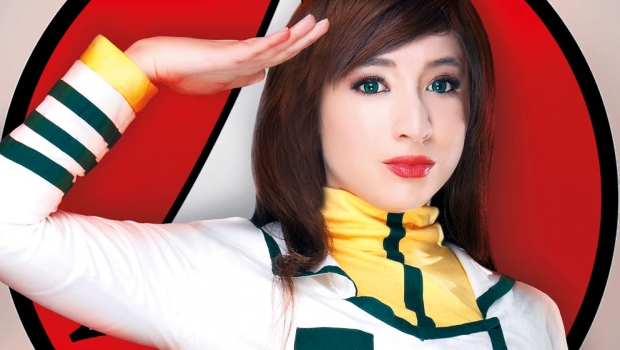 This July 26, Robotech – the iconic ‘80s Sci-Fi anime – returns to Macross Island, the place where it all began. Writer Brian Wood, artist Marco Turini and colorist Marco Lesko have crafted a thrilling new tale that’s perfectly accessible to new fans, as well as providing a deeper layer of twists for old-school protoculture addicts.

Check out the teaser trailer for the new comic series here.

Robotech fans are encouraged to place their order for this special #1 cosplay variant cover featuring Kitty Honey as Lisa Hayes now through their local comic store (which they can find via www.comicshoplocator.com) using the order code: APR178859.

First airing in the USA in 1985, Robotech was the gateway to anime for many fans – capturing their imagination with its epic generational storyline involving war, romance, and, of course, the transforming Veritech fighters that defend the Earth against extra-terrestrial attacks. Produced by Harmony Gold USA, the original 85-episode series delved into humanity’s struggle against a series of alien invasions, from the gigantic Zentraedi to the mysterious Invid, battling for control of advanced alien technology that crash-landed on Earth.

In July, the story continues as we bring Carl Macek’s original vision full circle. Taking into account every iteration of the series, this new Robotech #1 casts a fresh eye over classic characters like Rick Hunter, Lisa Hayes, Lynn Minmei, Roy Fokker, Claudia Grant, and Henry Gloval. Brian Wood and Marco Turini take us back to a Macross Island where *nothing* can be taken for granted.