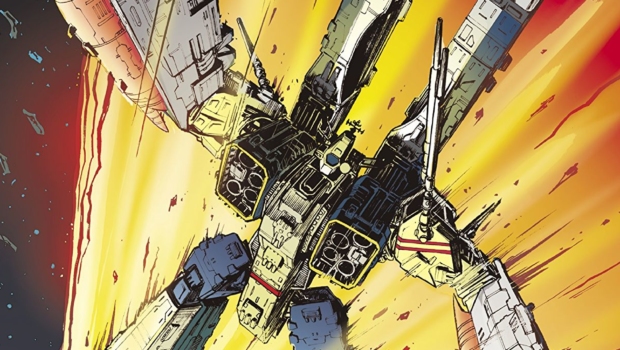 I review the latest Robotech trade paper back, “Lisa’s Report” from Titan Comics, The story lines of this TPB still follow the Macross story lines fairly closely and this book finds the SDF-1 returning to Earth after it’s long journey from Pluto after having accidentally space-folded there to escape the Zentradi.

One story element that has been changed is that Commander Gloval is dead and Lisa Hays is in charge. She has to confront her father who heads the Robotech Defense League and does not want the SDF-! to return to Earth as it poses to great a security risk as it is the object of the Zentradi ambitions. Meanwhile, Miriya, Zentradi ace pilot, enters her duel with Max Sterling. Some of the best story lines of the original season 1 of Robotech get explored in, “Lisa’s Report.”

As Rick undergoes a strange evolution, the SDF-! Are rocked by casualties, new foes, and secrets from Earth!