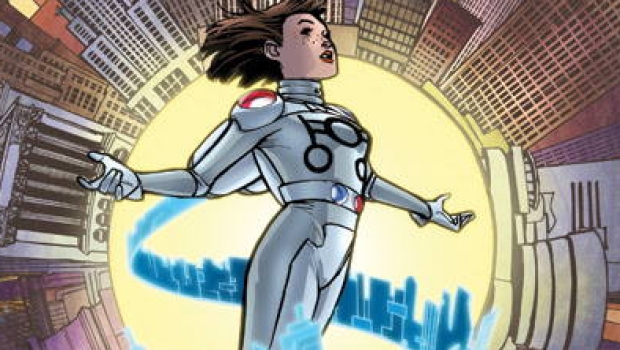 Fan favorite writer Brandon Montclare (Halloween Eve) and Eisner Award nominated artist Amy Reeder (Batwoman, Madame Xanadu) return with the eagerly anticipated new story arc of the bestselling, time-traveling adventure series in ROCKET GIRL #6. With dayglo-vibrant artwork and kick-ass characters, ROCKET GIRL marries the suspense of Back to the Future with the witty dialog of Marissa Meyer’s The Lunar Chronicles as it blasts off into its next chapter.

In ROCKET GIRL #6, time-travelling teen cop DaYoung Johannson thinks she’s closed the case—and destroyed her own world in the process. Now all she has to do is sit back in 1986 and watch the future unfold how it’s “supposed” to…but growing up ain’t easy. Unknown to her, she’s not the only person from the hi-tech alternate 2014 stuck in the ‘80s. And with the keys to the future in their hands, Quintum Mechanics isn’t content to simply let time take its course.

“Readers will have to judge what gets more twisted: the temporal paradoxes, or the motivations of characters faced with impossible adventures,” said Montclare. “Plus you get all the fun stuff: amazing visuals split between an ’80s NYC period piece and the high-flying future city, action, speed, and one of the most unique casts of characters in comics. I’m thrilled the ‘80s adventures of DaYoung Johansson are back with #6 and a new Rocket Girl arc. The support from retailers and readers has been awesome—I know they can’t wait too!”

“Rocket Girl has been the greatest creative experience of my career,” added Reeder. “I think it shows on the page, and I’m happy the reception to the first arc was so positive. But you ain’t seen nothing yet! The ‘Split Second’ arc is going to knock off some socks.”