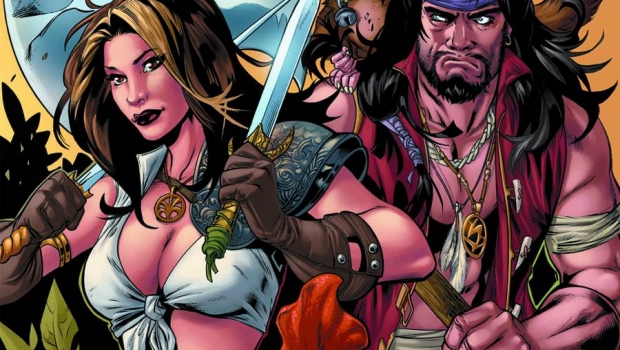 Amigo Comics is proud with the instant sell-out for ROGUES! #1 and #2. Only a few copies remain at the Amigo-office for personal use and just maybe a comic book store made a good investment, not to mention a good judgement call and there might be a few issues left locally!

In The Comic Speculator, Matt Baum’s “What to Watch”: “Newcomer Amigo Comics is getting some good buzz with its title Rogues. Issue #2 hit the shelves this week and was sold out before shipping. If the buzz continues expect Rogues #1 and #2 to be very hard to find.”

Rogues! #2 is sporting a cover by Emanuela Lupacchino (X-Factor, Archer and Armstrong, Ame-Comi, Castle) and features a story about how Bram -the boastful northerner- and the sultry Weasel are struggling to get rid of the unbearable Curse of the Chicken. To lift this curse, these brave thieves must not only fight the vile sorcerer Amthaeramus, but also defeat golems, resurrect dead wizards, sneak into forbidden underground passages and even meddle in certain love affair.

“This comic is actually very, very good. It’s something that the industry has needed for a while and I don’t even think they knew it.”

“Rogues! is swashbuckling fun in the most raw and entertaining form! (…) The story is a well-paced riotous romp, filled with both action and gritty humor – it’s just all in all unpolluted fun.”