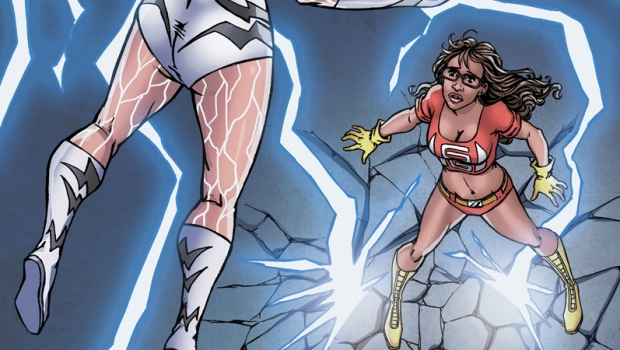 At the beginning of Ruby Kaye’s mini-series, mysterious super-villain Lightning Storm came out of nowhere and hospitalized Maine’s long-term resident super-heroes, Neon Girl and Pit Bull. And Neon Girl tasked new-hero-on-the-block Ruby a.k.a. Geek-Girl with finding and stopping her…

Having won her super-power-inducing glasses on a whim, Ruby didn’t really know what she was doing at first – but she’s been starting to get to grips with things, and now, as Lightning Storm’s threat escalates, it’s time for Ruby to deliver. Whether she’s ready or not.

“Ruby Kaye got her powers on a drunken whim,” says Geek-Girl creator/writer Sam Johnson; “her thought process didn’t really go beyond ‘I want them’ when she and her friend Stacey got their inventor, college brainiac Trevor Goldstein, and his pal Jeff drunk and beat them in a game of Strip Poker for the glasses. The initial effects they had on Ruby were less than ‘super,’ as, not used to the super-strength they give (as well as flight powers), while ‘showing them off,’ she knocked drinks over her clique and set herself on a path of alienation from them – with only her BFF Summer standing by her.”

Johnson continues, “Summer was enthusiastic about the glasses and what Ruby could do with them, and she kind of pushed Ruby down the path that we, as comic readers, would expect someone who gains powers to take – and after a very shaky start, Ruby seems to be finding her mojo.

“But now Lightning Storm is back, more powerful than ever, and reigning devastation on her city. Still a newbie, it’s up to Geek-Girl to stop someone who easily took down people who have been in the ‘superheroing’ game a lot longer than she has, and who are a lot better at it than her.”

Johnson concludes, “Ruby isn’t a ‘woman of steel,’ she’s a college co-ed who landed herself with a role she hadn’t thought through. She’s inexperienced, out of her depth and scared. But she just might be a hero.”

Geek-Girl #4 written by Johnson, illustrated by Carlos Granda, and published by Markosia is Out Now and available in Regular, Digital and Variant editions at www.geekgirlcomics.com and www.comixology.com – along with new Variant Editions of Geek-Girl #1-#3 for newcomers to her mini-series.

“A charming debut, the dialogue displays a witty back and forth that would make Kevin Smith proud.” –Kris Bather, Broken Frontier.