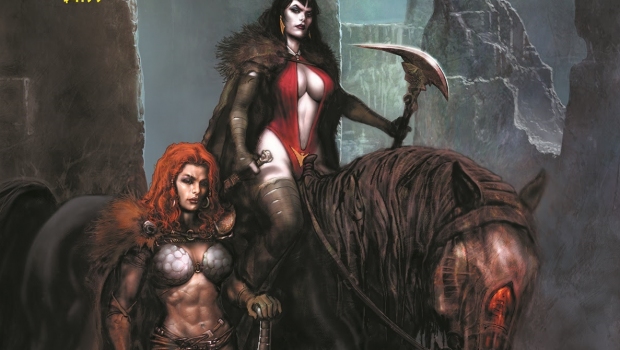 The legendary title Savage Tales returns this July to heat up the summer with a special anthology with stunning artwork and stories. Across four stories, readers will get to hang with their favorites Red Sonja and Vampirella as written by Scott Brian Wilson, as well as classics Allan Quatermain and Captain Gullivar Jones by David Avallone.

Red Sonja’s “The Executioner’s Sword” features the art of Al Barrionuevo (Batman Gotham Knights, Storm), as the She-Devil deals with a horrific mix of magic and swordcraft.

“Missionaries of Madness” starring Alan Quatermain with art by Will Rio pits the legendary hunter against a cult worshipping Cthulhu. Equipped with just a rifle, can Quatermain stand against the dread of the Great Old Ones?

The stories starring Vampirella and Captain Gullivar Jones are drawn by two up and coming artists from the legendary Kubert School. Founded by the innovative Joe Kubert, known for his acclaimed war, superhero, drama, and autobiographical comics, the prestigious institution offers students an unparalled education in cartooning and graphic art.

Captain Gullivar Jones is drawn by Kubie Hamish Cook, in “His War.” Taking place years after his adventure on Mars, Jones finds himself amidst a new darker war that may just lead to his redemption.

The legacy of Savage Tales and other anthology mags in its vein rests just as much on standout covers. Arthur Suydam depicts Vampirella in an homage and now companion to his cover starring Red Sonja for Dynamite’s first Savage Tales title from 2007. A variant starring Sonja is handled by sword and sorcerery great Rafael Kayanan. Then the acclaimed Liam Sharp turns in a cover featuring both of Dynamite’s stars.

SAVAGE TALES #1 is solicited in Diamond Comic Distributors’ May 2022 Previews catalog, the premier source of merchandise for the comic book specialty market, and slated for release in July 2022. Comic book fans are encouraged to preorder copies of the issue with their local comic book retailers. It will also be available for individual customer purchase through digital platforms courtesy of Comixology, Kindle, iBooks, Google Play, Dynamite Digital, ComicsPlus, and more!