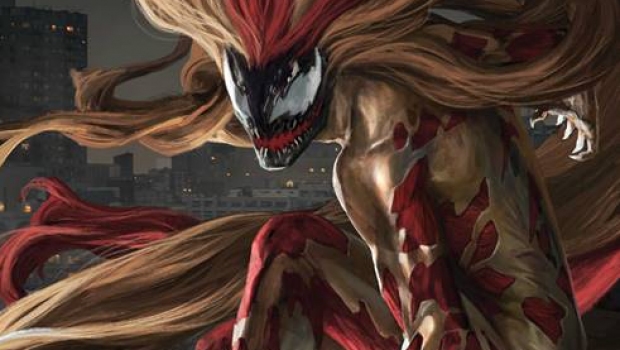 Marvel Comics announced a new symbiotic showdown spinning out of King in Black—EXTREME CARNAGE! Kicking off in July with EXTREME CARNAGE ALPHA #1, the event will take place over a series of one-shots, each one spotlighting a different symbiote offspring beginning with Scream! EXTREME CARNAGE: SCREAM #1 will see the return of writer Clay McLeod Chapman and artist Chris Mooneyham, the hit creative team behind SCREAM: CURSE OF CARNAGE. Their reinvention of one of Marvel’s most iconic—and lethal—symbiotes continues as Scream must find a way to put an end to the twisted vision that Carnage has in store for their kind.

Andi Benton has always been a fighter, and that’s never been truer than since she bonded to the Scream symbiote a few months ago. But even after Absolute Carnage and King in Black, Andi has never had to fight like this — and, worse still, if she can’t save her symbiote from whatever unseen force is affecting it, she might have to do it alone… Here’s what Chapman had to say about continuing the thrilling saga of Andi Benton:

“Extreme Carnage is a dream—scream?—come true. Not only am I utterly in awe of the sheer talent involved in mapping out this massive event, but I feel honored to be able to return to the character of Scream and further explore the complex relationship dynamics between them and Andi Benton. These two characters have such a profound bond with one another, whether fused together or torn apart, that every time I get to tell another chapter in their legacy feels like an immense privilege. Viva la Scream!”

Check out the EXTREME CARNAGE: SCREAM #1 cover below and stay tuned tomorrow for more information on the other action-packed installments that await when EXTREME CARNAGE begins in July!