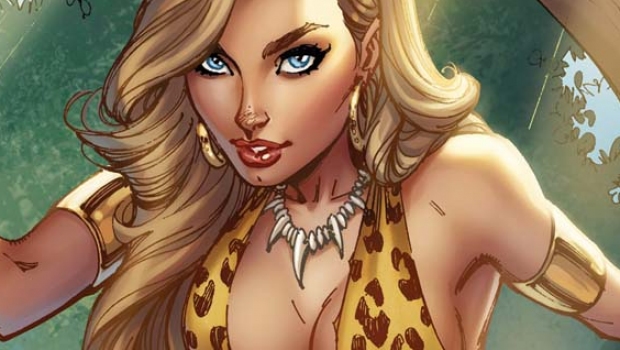 Sheena, Queen of the Jungle Launch by Bennett and Moritat

Things heat up this summer, as Dynamite Entertainment welcomes readers back to the jungle with the launch of their latest iconic character, Sheena! Written by the creative dynamic duo made-up of GLAAD-Nominated, NYT Best-Selling Marguerite Bennett (Batwoman, Animosity) and newcomer Christina Trujilo, with illustrations by Moritat (Hellblazer, Teen Titans, Elephantmen), everyone’s favorite Queen of the Jungle swings back into action on August 2, 2017 when issue #0 lands in stores! 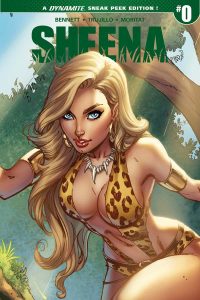 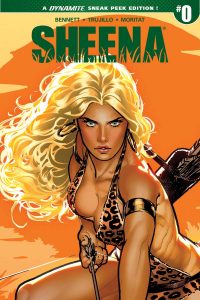 Artist Moritat says, “Stepping into Will Eisner’s large shoes yet again, but this time wearing nothing but a leopard mono-kini. Marguerite Bennett’s brilliant contemporary re-telling of this famous legend is my favorite to date. I can’t wait to see if the fans like it.”

Dynamite Entertainment Executive Editor Joseph Rybandt said of the new project, “Sheena has long been a staple feature throughout the history of comics and we’re especially proud to be adding new voices to that history. Marguerite and Christina present a timely and empowering tale – enhanced by the pitch-perfect visuals of Moritat – to create a Queen of the Jungle for the 21st century… and beyond.” 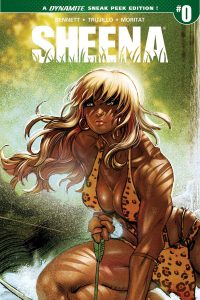 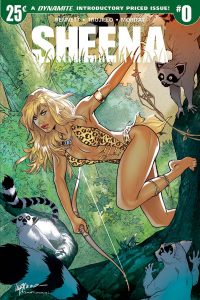 “Sheena is one of the strongest and most iconic characters in comics, and we’re fortunate to be working with three incredibly talented creators. Marguerite and Christina make a great creative team giving Sheena a new voice, and is complemented by the lush artwork that Moritat brings to the series,” says Dynamite CEO and Publisher Nick Barrucci. “We are incredibly proud of this series, and are launching it with the same program we launched Red Sonja #0 and Vampirella #0, with a .25 cent Introductory Priced issue. This allows retailers to stock up at a low risk so that as many fans as possible will have the opportunity to read the series. It’s a program that worked successfully for Red Sonja and Vampirella, and we’re doing so again with Sheena! I cannot wait for fans to check out the new series!”

Sheena began her fictional existence as an orphan raised by a shaman in the jungle, perfecting her survival skills and mastering the ability to communicate with animals. Her many adventures brought her into conflict with evil hunters, slave traders, and rampaging wildlife. The character has thrilled audiences in several television and film adaptations, including portrayals by actresses Irish McCalla (1955-1956), Tanya Roberts (1984), and Gena Lee Nolin (2000). Dynamite Entertainment has a long history of publishing jungle fantasy and pulp adventure, making it the perfect home for Sheena!

Cover artwork for Sheena #0 spotlights the talents of the Emanuela Lupacchino (Starfire, Supergirl) with limited variant editions including “Sneak Peek” covers from interior artist Moritat, as well as from Ryan Sook (X-Factor, The Spectre) and J. Scott Campbell (The Amazing Spiderman)!

Sheena #0 will be solicited in Diamond Comic Distributors’ June 2017 Previews catalog, the premier source of merchandise for the comic book specialty market, and slated for release in August. Comic book fans are encouraged to reserve copies of Sheena #0 with their local comic book retailers. Sheena #0 will also be available for individual customer purchase through digital platforms courtesy of Comixology, Kindle, iBooks, Google Play,Dynamite Digital, iVerse, Madefire, and Dark Horse Digital.