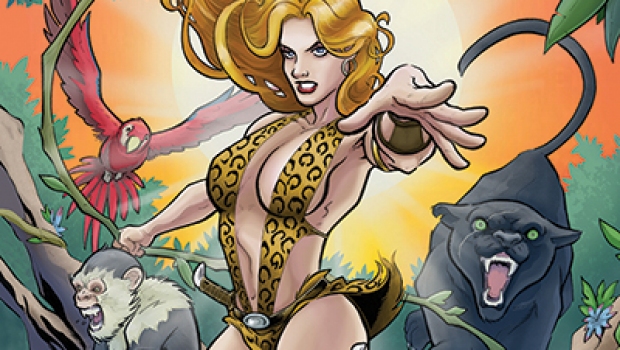 Moonstone has released their title for March 2014.

DIE HARD screenwriter Steven E. de Souza’s critically acclaimed reboot of Will Eisner’s SHEENA, QUEEN OF THE JUNGLE comes to Moonstone in this action packed series! When archaeologists exploring ruins on Rachel Caldwell’s remote jungle estate are found torn to bits, the authorities blame “savage terrorist” Sheena – but Rachel knows otherwise, since she is Sheena – but what she can’t believe is the only remaining explanation – the curse of the Jaguar Men!

*RETAILER INCENTIVE= one free copy for every 5 ordered

A cruise ship crashes suddenly on Liberty Island. All onboard are dead by their own murderous hands. All but one. What secrets does the lone survivor harbor within her very soul? And what horrors does she bring? These are questions only the Green Lama can answer!
Reintroducing the most unique Pulp Hero ever! In reality, The Green Lama is Jethro Dumont, a millionaire playboy who spent ten years in Tibet and now uses his Buddhist training to pursue Justice for those denied it!
Can even the Green Lama, with his mastery of the supernatural and his radioactive salts, be enough to prevent the coming of….SCIONS?