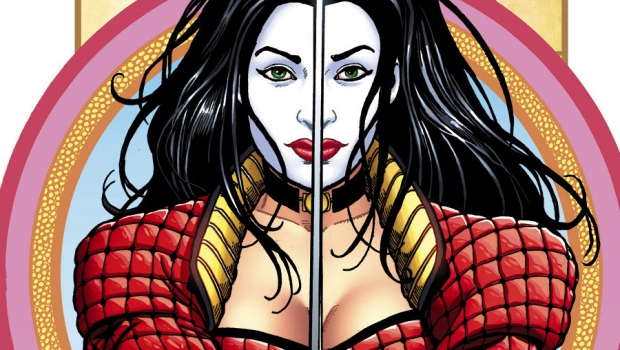 Acclaimed writer-artist Billy Tucci’s most famous creation, Shi, will return in an all-new 48-page graphic novel, Shi: Return of the Warrior, the character’s first new full-length adventure in 15 years. Defying traditional comic book practice, the book’s heroine, Ana Ishikawa, has aged a quarter century since we first met her in Shi: The Way of the Warrior #1, her 1994 debut. Shi: Return of the Warrior is set to launch Thursday, November 14, 2019, via a dynamic, two-pronged crowdfunding campaign.

“I love the idea of a comic book character that grows up as time progresses,” Tucci said. “Our story opens with single mother Ana Ishikawa, now in her 40s, with her warrior days far behind her, living a peaceful exitance and raising her teenage daughter Hotaru.”

That all changes when “Dr. You” (a character that will be named after one of the campaign backers via a special pledge level) brings the terrifying news that her old adversary, Masahiro Arashi, has escaped from a New York City mental institution. Now suffering from dementia, her former foe has regressed to his younger, more violent self, and he’s obsessed with exacting revenge on the person responsible for his incarceration: Ana Ishikawa.

Manhattan is once again gripped a series of gruesome killings, ones that copy the Shi killings of 25 years earlier. A desperate Ana and “Dr. You” must try to seek out and stop Arashi before he can consummate a murderous destiny, one that ends with Ana’s own daughter.

“It’s amazing to have Amanda back at Crusade and it’s beyond incredible to have a post-retirement cover from George, too. And it’s a true privilege to make the comics world aware of such rising talents as Conny and Mike on our variant covers,” Tucci said. Conner illustrated the original Tomoe mini-series, and Pérez also has a previous place in Shi history with his art in Shi: Senryaku.

Following his recent success with Zombie-Sama!, Tucci aims to reach the widest possible crowdfunding audience for Shi: Return of the Warrior with simultaneous 22-day campaigns on both Kickstarter and Indiegogo. Both campaigns launch Thursday November 14 at 9 p.m. EST and end on December 6.

“After all this time it feels liberating to resurrect the one character to which I owe my entire career,” Tucci said. “Thanks to our crowdfunding partners and backers, Shi’s back!”

Billy Tucci is an award-winning cartoonist best known for his modern-day samurai fable which began with Shi: The Way of the Warrior in 1994. Since then, though his company, Crusade Fine Arts, Shi has been printed in five languages and sold more than 3 million comic books. In addition to his own creations, he was worked extensively for DC Comics such characters as Harley Quinn, Batman, Superman and Flash. His graphic novel, Sgt. Rock: The Lost Battalion, won acclaim for its depiction of the highly decorated, real-life 442nd Regimental Combat Team, which was comprised of Japanese-American troops not permitted to serve in the Pacific theater. His earnest retelling of the Christmas story in A Child Is Born has quietly turned into an international blockbuster. It won the Christian Small Publisher Book of the Year Award.. He recently released Zombie-Sama via Kickstarter and Indiegogo, and Appalachian Apocalypse via Cave Pictures Publishing. He has a Wonder Woman story due out from DC soon.