Sin, Religion & the Apocalypse…in Vegas Penny for Your Soul returns with Death – Comics for Sinners
News 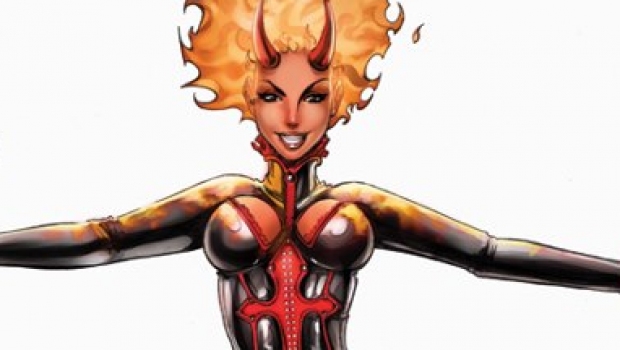 Tom Hutchison returns to delve even further into the story of Danica, the granddaughter of the Devil, as she continues to claim her place in the age old battle of good vs. evil, and carve out her roll in the end of days battle between Heaven and Hell!  Which side will she choose?  Why her own of course, but she won’t be doing it by herself.  Longtime friends will return, along with new companions, and the sarcastic, snappy, sexy but always smart, story that fans have come to expect from Big Dog Ink’s guilty pleasure in a comic book!

Big Dog Ink believes in bringing fans consistent quality, which is why the art team of JB Neto on pencils and Oren Kramek on colors for interiors and “A” covers also return when Penny for Your Soul marches one seal closer to the final battle and the next horseman of the apocalypse appears!  A new addition to the team, superstar up and coming artist Jen Broomall is bringing the sexy back as she lends her pencils to the “B” covers.  Issue #1 will also feature an amazing 1/10 retailer variant with a painted cover by total package artist Natali Sanders!

Available for pre-order in the June Diamond Previews catalog and releasing this August, Penny for Your Soul: Death will follow in the tradition of its predecessors as a 7-issue mini-series event.  This hot and provocative comic will ship monthly and retails for $3.50.