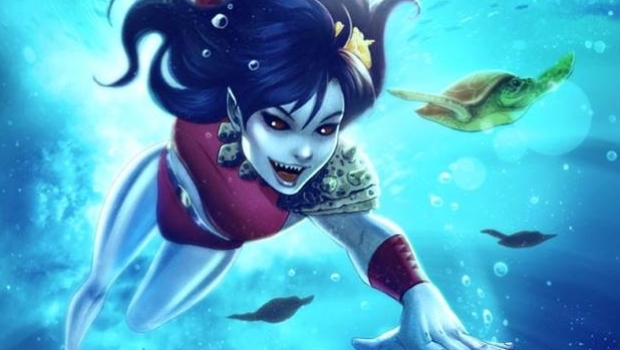 Sistah Shark Is Coming Back For A Bite

Just when you thought it was safe to go back in the water Christopher Caravalho brought the creative team of Sistah Shark #1 back together for one more exciting adventure with Hawaii’s First Local Girl Superhero. 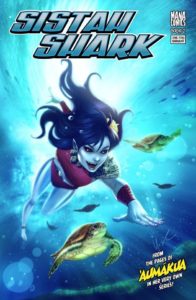 In 2014 Christopher Caravalho created a team of superhero team called the Aumakua Guardians of Hawaii with a roster of characters that reflected the many different ethnicities of our island home.

Among the heroes such as Royal Hawaiian Guard, The Phantom Surfer, and Geckoman, one hero quickly became a fan favorite. Her name was Sistah Shark!

Caravalho wanted a chance to highlight the characters as indviduals so he decided to create solo stories of two of his favorite characters of the Aumakua series. He invested his time and energy into creating another comic book title called MANA DOUBLE FEATURE.

In this book Caravalho wrote a story entitled “Deadly Waters” It tells of the origin of a small beach town local girl named Lani Castillo. As a baby she was rescued by a man at the end of his ropes who in turn became her father and devoted his life in giving her a normal upbringing. As normal as raising a girl who goes full ‘Sharknado’ at the drop of blood. 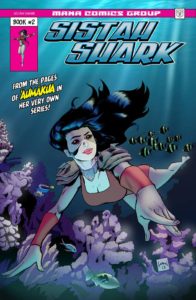 In SISTAH SHARK #1 we dove head first into Lani’s life as she battled gangsters, a monk seal shifter and the Yakuzas greatest weapon TAKONINJA!

SISTAH SHARK #2 continues where Issue #1 ended as Lani Castillo has to get her head on straight as she is overwhelmed with enemies and a dark deadly secret.

As Caravalho says “Developing strong female characters is so important to me. I firmly believe Females are not tight spandex and eye candy and I think i was able to reflect that with Sistah Sharks touching and relatable origin story. I was so excited to discover that a lot of island girls fell in love with the character which gave me the motivation to co- write and and with the help of family, firends and FINatics publish Sistah Shark #1 “The Hunter and the Hunted”.”

You can get back issues via the current Kickstarter campaign or www.manacomics.com