Sisterhood comic launch approaches, I have talke..." /> Sisterhood: About Mummy’s and Werewolves - Comics for Sinners
Sisterhood 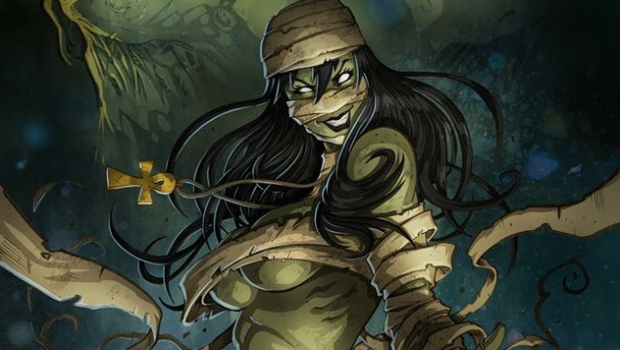 As my Sisterhood comic launch approaches, I have talked about the origin of my fascination, my first ashcan many years ago, my silent period and whatnot. Perhaps it is time to showcase how one of the newest stories is coming along so very nicely.

It is a story writer Justin Lee Fox has come up with. It is not his first story, nor will it be his last, I am sure. He just had this feeling about writing a story about love and betrayal concerning Gwynn, whose character just appealed to him and got his muse going, I guess.

The story synopsis goes like: In 1928, Gwynn is in search of the legendary spearhead of Bolg of Cúchulainn; an artifact that could make a normal man a king. But she is not the only one looking ferally for this artifact…

The script was finished and French artist Vinz el Tabanas (now living in Canada, creating TMNT games and much more!) was already dedicated into getting it all visually on paper. Markus Von Renthe-Fink – as story editor – browsed through the script as well to make sure that panels were descriptive enough and descriptions were done per panel and not for multiple panels for instance. Inconsistencies, written in the sheer delirium of creativity and enthusiasm, were discovered and amended and all the while the artist already produced a promo piece as well as the first rough layouts and a study-piece.

From this point on, Vinz received more reference material from me. About braids, motor bikes, dresses and facial references.

What I could clearly see from the work Vinz already is showing in the roughs is how Justin’s script can benefit from this kind of visualization.
You see where his script overextends in descriptions and actions per panel.
Vinz makes decisions on panels and directions. He takes Justin’s ideas but his visuals and pencils make it a real joined effort.
I think it is great teameffort!

The rough layouts are then magically – so it seems – turned into rough pencils. You can see a lot of the action sequences already and you might notice this will turn into a visually story, suited to the style of Vinz you might even say.

The story will come to a more introvert (like NOT) ending, but that would spoiler too much so I will just leave you all with the first WORK IN PROGRESS (so yeah, some changes might still be forthcoming! I wanna keep teasing !!) of the first page, so you can see who the end-result might look like.

Keep checking back to make sure you notice the KICKSTARTER being set up soon. Not yet for this issue here, but I will show you which story will be the first to be broadcasted and which was also showcased in the ASHCAN, you can buy if you want.

Or just wait for the Kickstarter option and add the Ashcan, which has a lettered rough-pencil sequence, a “cover in progress” section as well as an art-part with many pinups!