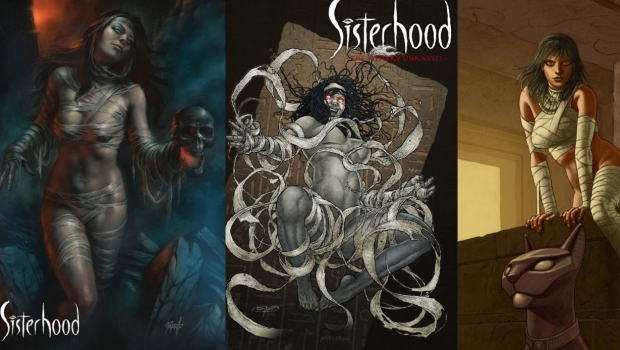 Join the Sisterhood-armada fandom in the next installment of Richard Boom’s instant Kickstarter success, “SISTERHOOD”! Questions answered,secrets revealed! That is a promise! And with only 4 days left, it is a sure thing!

Aside from a variant cover, graciously provided by Greg Capullo, there is art by Lucio Parrillo, Juan Jose Ryp (Valiant’s RAI) and Paul McCaffrey as well.
And there be praise! PRAISE, can you say PRAISE?!
From Justin Gray (Power Girl, Jonah Hex) to Billy Tucci (SHI, Zombie-Sama, Harley Quinn) to Thomas Sniegoski (NY Times Bestselling Author, Buffyverse, Vampirella) there be Praise!

As publisher Richard Boom (BAD Press Comics) is planning all sort of Sisterhood oneshots it is clear that “Fall Of Dymonos” is the second oneshot. It delves deeper into two of the characters mentioned in the first story “Mystery Unravels” as well as giving more context to another character. Still both issues can be read separately. The first comic established the Sisterhood as a team, the second will give more context history-wise and then a few upcoming stories will focus more on single persona’s like Gwynn who will be going up against Nazi Werewolves.

Synopsis Main Story: Upon returning to his mansion, high-priest Dymonos makes a heart-wrenching discovery that not only lets him question his loyalty towards his master, the mighty god Khepri, but also sets him on a path of righteous revenge and destruction. Then again – sometimes, not all is at it seems. Brace yourselves for love, heartbreak, daddy-issues and all-out mayhem as we dive deeply into the Sisterhood’s ancient past and learn how Dymonos became the man/spirit he is today in a yarn we like to call “The Fall of Dymonos: Whom Gods Destroy“!

Please join the ongoing stories of the SISTERHOOD, as it develops via the Kickstarter and Indiegogo platform