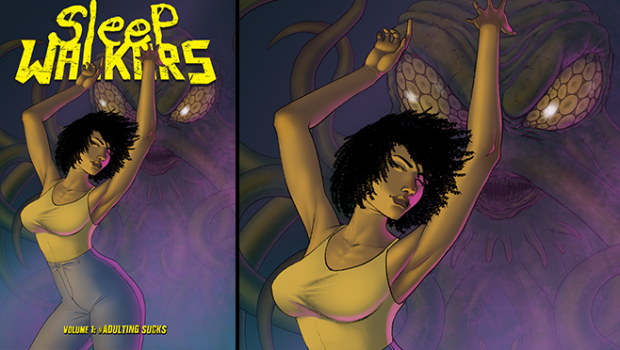 A 110-page graphic novel about life after graduation, the horror of adulting, and imagining yourself as a superhero.

Sleepwalkers is a story about the gap between the imagination and the reality of adult life: what happens to your dreams when you have trouble “fitting in” and don’t know why, Sleepwalkers explores issues of social justice, the gig economy, and coping with the horror of modern-day adulting.

Degree in hand, Faith Richmond’s big dreams soon meet the reality that wanting to change the world doesn’t mean you actually can. Struggling to find work as she watches her friends get ahead, it feels like her dreams have become nightmares.

What Faith doesn’t know is that she is making a difference. When she sleeps, her subconscious takes over as a real superhero, making the world better in ways she never imagined.

Convinced her life won’t fail to start forever, Faith decides the only way to deal with #thestruggle is to push through it, risking her dignity and her future in the process. That’s when the real nightmares begin.

What are People Saying About The Series?

“Sleepwalkers; a story of the nightmare of failed dreams and the pressure of career, societal and personal
expectations, wrapped in a world where the super-powered are not all they seem. Danny Gorny delivers a well-observed story steeped in real-life elements, a well-rounded cast of characters and sparkling dialogue, asking us ifour dreams can ever come true if we sleepwalk through life.”
Johnny “The Machine” Hughes, Editor-in-Chief, Comic Crusaders

“Sleepwalkers was a book with an excellent twist. And the frequent presence of police watching her was perfect for her paranoia that she was being watched. It’s so relatable to finish school, be so excited to be an adult and findout that adulting sucks and it never seems to be enough.”

Production is 100% complete, fulfilment is expected to be complete in time for everything to be delivered before Christmas 2022.
Kickstarter: www.divergent.pub/sleepwalkers