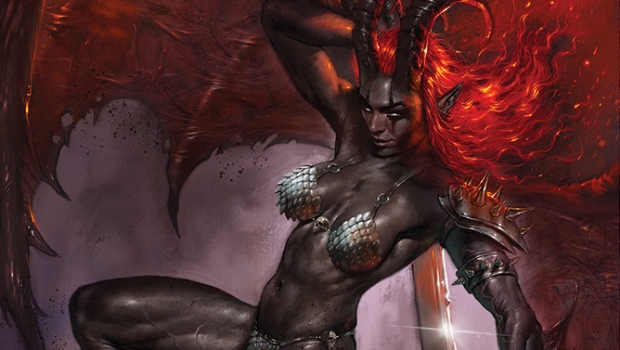 “Thanks to fabulous fan support, Dynamite and the creative team are excited to announce the extension of Sonjaversal and a great new jumping-on point!”

The ultimate story of Red Sonja multiversal mayhem was originally set as a five issue miniseries. By popular demand, more is to come, starting with issue #6 this July. Writer Christopher Hastings (Unbelievable Gwenpool) and artist Pasquale Qualano (Dejah Thoris) return for an all-new story arc perfect for new readers while continuing the same boundless energy and creativity of the previous issues.

With the opening story blasting open the metaphorical toy chest and introducing an endless expanse of Sonja’s battling for the fate of the universe, now the team will drill down and focus on select Sonja’s in a more episodic format.

Making her moody debut in this issue is Noir Sonja! She’s on the trail of someone making a huge splash in the criminal underworld – only problem is that they’re dead. Actually, she has more problems, as a whole new onslaught of alternate Sonja’s throw off her investigation.

“I love to play with genre, and this arc is going to be all about mashing up Red Sonja’s sword and sorcery with noir, then gothic horror, then space opera, and 80s action movies. It’s a blast,” said writer Christopher Hastings.

Fans can stay tuned for full explorations of even more wildly unique takes on the She-Devil With a Sword!

A top tier team of cover artists bring their own multiverse-esque appeal to the title with the diverse stylings of Lucio Parrillo, Joseph Michael Linsner, Jae Lee, Junggeun Yoon, and of course Dynamite’s fan-favorite cosplay covers.

SONJAVERSAL #6 is solicited in Diamond Comic Distributors’ May 2021 Previews catalog, the premier source of merchandise for the comic book specialty market, and slated for release in July 2021. Comic book fans are encouraged to preorder copies of the issue with their local comic book retailers. It will also be available for individual customer purchase through digital platforms courtesy of Comixology, Kindle, iBooks, Google Play, Dynamite Digital, ComicsPlus, and more!