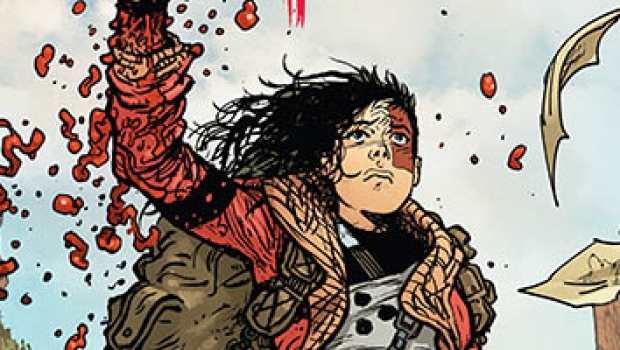 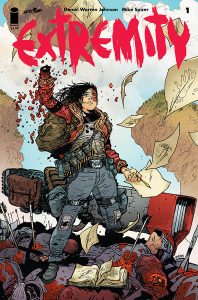 Thea dreams. Not of a better life, but of revenge on the clan that ruined her family. With ferocious battles between man, machines, and monsters ahead…who knows where her quest for vengeance will take her? Creator Daniel Warren Johnson and colorist Mike Spicer present a bold new vision, where the beauty and imagination of Studio Ghibli meet the intensity of Mad Max in this all-new Skybound Original.

“EXTREMITY is a comic that I’ve been working out for over three years,” said Johnson. “It’s had many different variations as I’ve created it, but the final product is something I’m very proud of. There are scenes in this book that were a tremendous joy to draw, and I believe that joy is present in my story and in my lines.”

“Also,” added Johnson, “the color palette is incredible, thanks to my colorist Mike Spicer, who has done a WONDERFUL job elevating the visual aspect of the book beyond what I thought it could be. I hope you try it out and I hope you enjoy it!”

“People like Daniel Warren Johnson are rare,” said Sean Mackiewicz, Editorial Director at Skybound Entertainment. “It takes a split second to realize he’s an incredible artist, and he’s also an accomplished writer (see: Space Mullet). So Daniel’s the ideal type of creator we love to work with here at Skybound: bursting with ideas and talent, who just want us to give them the space to create and the platform for you all to read it.”