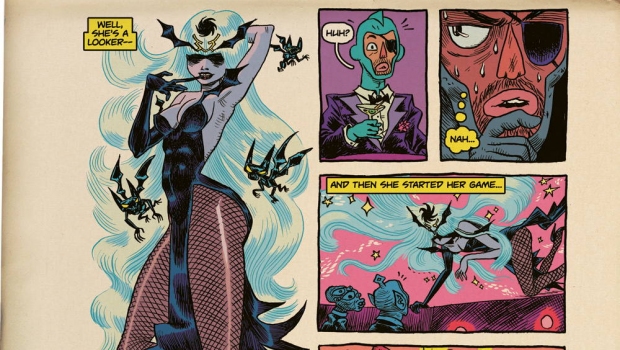 In the tradition of publications like Heavy Metal and 2000AD comes Strange Kids Club Magazine—a self-published comics and humor magazine that provides new and upcoming creators a chance to have their work seen in print while also expanding on the offbeat, irreverently funny universe of Strange Kid, the fictitious blue-haired mascot of Strange Kids Club.

The latest issue, now on Kickstarter, includes four self-contained stories by writers and artists from around the globe and introduces readers to a brand new character, Bronarr: Space Barbarian! Behold as Bronarr blasts, bludgeons, wrestles and wiggles his way through the forces of evil amongst the stars—a hilarious parody of madcap muscleheads like Thundarr the Barbarian and He-Man—in a space misadventure starring Strange Kid and his pals Lando, a smart but relatively normal kid, and Orwell, a chupacabra who only speaks Spanish.

Also featured in this issue:

We Are Pirates (Part 1) by Michael Anderson
While running from a giant monster across the waterless wasteland that is now Earth, the fearless adventurer No-Beard runs into a band of Bounty Hunters looking for a big score. Just so happens No-Beard has a high price for his head, and the bounty hunters know it. But could there be something more sinister that unites this motley crew?

Grayskull Grindhouse: If I Had the Power by Mike LaRiccia
Witness as everyone’s favorite blonde barbarian embarks on a quest of vengeance in this hardcore parody that stars a bloodier, definitely more brutal, cast of men and monsters set out to master the universe. Prepare to go to uncomfortable places—this comic is not for children… or sentimental adults.

Star Iguana: Black Hole Witch by Joshua Agerstrand & Ralph Niese
Meet Star Iguana, former Starbase engineer turned Space Pirate after being resurrected by The Masonian Gods—secret rulers of the universe—to do their bidding for eternity. On this mission, Iguana and his crew are tasked with capturing The Black Hole Witch, one of the galaxy’s deadliest femme fatales.